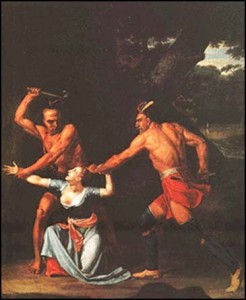 When watching the old western television shows, we are told of the conflicts with the Indians, and how dangerous it was for the settlers to come out to the West, but rarely do we relate that to members of our own family…although I do not know why exactly. For any of us who can trace our roots back to people who moved out west in the 1800s or before, the risk of conflicts with the Indians is a very real part of our family’s past. For the Knox family, of whom my husband, Bob Schulenberg is a member, whether they know it or not, the Indian conflicts became a very real tragedy at one point. Bob’s 6th Great grandmother, Jean Gracey Knox had a brother named Patrick Gracey. Patrick immigrated to America with Jean and her husband, John. After the immigrated, Patrick met and married Rebecca Barnett, and possibly later married a second time to a woman named Hall. Patrick raised a large family, and one of his daughters, whose name is unknown, was scalped by the Indians, along with her baby. I realize that many

people were scalped by the Indians, and that there might have been a number of them who were related to my family or to Bob’s, but it somehow seems a little more real and quite unsettling when you know for sure that one of your relatives lost their life this way.

The scalp of the enemy was considered a trophy to the Indians. The more scalps, the better the status as a warrior. I suppose that many people would almost look at it as being similar to a serial killer, and maybe in some ways it was, but the Indians were so mad at the White Man for taking land that they felt belonged to them. I suppose it did, but then why couldn’t we all live together in peace. After all, America was and still is considered the melting pot, because we have taken immigrants from many countries to build this nation. Nevertheless, we were not always welcome here, and often it was our own fault for breaking the treaties we put in place.

Still, I cannot imagine a society in which it was acceptable to scalp a person. I suppose though, that the Indian culture wasn’t really a society in the same sense of the world that we think of society. Their beliefs and their practices were much different that those of the White Man. That is part of the reason we considered them savages, but in their eyes, they were brave, and they were fighting for their rights. It was a way of life. It was a necessary evil…at least in their eyes. It was as simple as that.