A Different Kind of Enemy 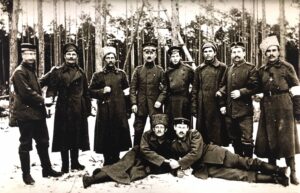 A truce in the context of war, doesn’t always mean a permanent end to the fighting. That is a fact that has often amazed me. If a war can be put “on hold” for a specific reason and a specified timeframe, why must the fighting then resume like the truce never happened? Nevertheless, resume it usually did. Such a truce happened between the German forces fighting the Russians forces in satellite regions like Lithuania and Belarus during World War I. The fighting raged in many different places at that time and continued through the winter of 1917.

The intense fighting throughout the heavily forested region and had an unexpected side effect. Any time humans move into an area, the animal 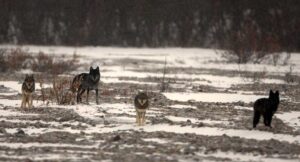 population instinctively moves deeper into wilderness areas where there is less interaction with people, but when the winter is harsh and food becomes scarce, the animals can become as desperate as the humans. In that particular area at that particular time, the Russian wolves were starving. Any prey they might have been able to hunt had vacated because of the intense fighting, and so they had resorted to taking the bodies of the fallen soldiers for food. When there wasn’t enough of that, they began to actively hunt the soldiers, so now the soldiers of the Russian and the German armies had a whole new enemy, and this one could not be reasoned with.

The wolves had progressed from raiding villages to taking corpses to accosting groups of soldiers outright, so 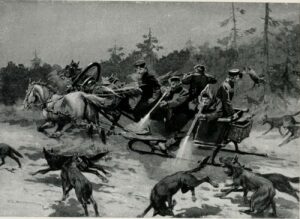 the two armies mutually decided that it was necessary to call a truce so they could rid the area of the unexpected mutual enemy…roving bands of gigantic Russian wolves. They were genuinely in fear for their lives. Wolves often attack in the dark and go for the weakest link or when people are sleeping. It became obvious that this would be a fight to the end…of one or the other…man or beast. So, both armies agreed to a temporary truce and went on a joint campaign of destruction. The wolves could not be allowed to stay, for the sake of anyone in the area. The two armies slew hundreds of wolves, and then simply resumed their fight. How very strange that seems to me, but I guess it probably wasn’t up to the soldiers to walk away from the war.