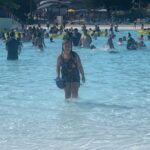 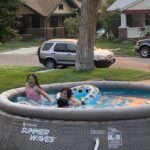 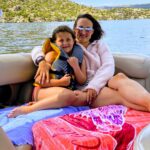 My grand-niece, Aleesia Spethman, loves being in the water. Whether it’s Water World, the lake, city pools, or the pool that has been in her yard all summer, spending time in the water with family and friends is the best way to spend the summer. Aleesia’s favorite pool at Water World is the Wave Pool. The wave pool allows people to surf the waves, even though they are not on the ocean. Even if you don’t surf, I guess you would get the feeling of swimming in the ocean anyway.

Aleesia and her mom, my niece, Jenny Spethman are best friends. She is Jenny and her husband, Steve Spethman’s youngest child, and their only daughter (here on Earth, anyway. Aleesia’s sister, Laila lives in Heaven). Jenny always wanted a girl, but after three boys, and Laila’s passing, wasn’t sure she would get one. Jenny loves all of her children, but the boys are into sports, and working now, so Jenny and Aleesia get to do the girl things like shopping. Aleesia likes to shop with her mom, but she also likes it when her dad goes to the mall with them, because she and her dad can play in the video arcade while her mom goes shopping. Aleesia loves her dad, and she really has him wrapped around her finger. She can get him to do just about anything 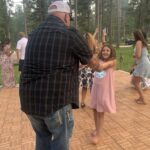 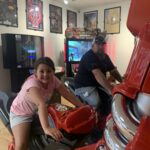 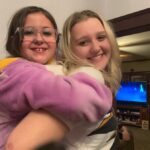 she wants him to, including dancing at her cousin’s wedding…in front of people, which Steve would rather not do. Nevertheless, for his girl…he will do it…just because she is his girl. Jenny has a three wheeled bicycle with a basket in the back, and Aleesia loves to be taken on rides in that bike, with her mom, or even her brothers.

Being the only girl child in the family isn’t always easy. The boys protect Aleesia, but they also pick on her. Aleesia’s brother Xander has a girlfriend now, Alli Simpson. That has been a good thing for Aleesia, because now the girls can stick together, as I’m sure the boys pick on Alli too. Of course, Aleesia has a group of girlfriends that she has known since she was 1 year old. They are all best friends, and love to do the same things, so whenever she can, Aleesia “escapes” the boy world she lives in and hangs out with her girlfriends, in Aleesia’s world. Aleesia also has another best friend…her grandma, my sister, Cheryl Masterson. They love to hang out after Cheryl gets off work most nights. It’s

been a long standing tradition almost since Aleesia was born. I suppose that one day that tradition will end, but my sister sure is enjoying it now, and hoping it continues for quite a while before that day comes. Today is Aleesia’s 9th birthday. Happy birthday Aleesia!! Have a great day!! We love you!!