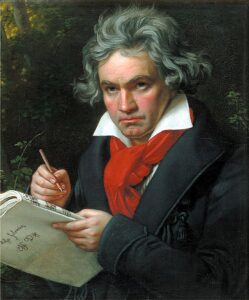 Most people have heard of Ludwig van Beethoven, whether they like his music or not. Most people also know that Beethoven was a deaf musician. I think many people think he was born deaf, but that makes no sense. If he had been born deaf, why would he have ever been interested in music? You really don’t desire to play music that you cannot hear. I don’t think that the mind of a child born deaf would simply have no concept of sound…much less music. Of course, these days, more can be done restore hearing than in Beethoven’s time, but even now, I don’t know if hearing could be restored to someone who was completely deaf from birth.

As a young man, with normal hearing, Beethoven became interested in music, and proved to be a musical genius. His hearing began to go in his 20s, and I have no doubt that it was a devastating event for him. Imagine being a man with a love of music, suddenly realizing that there will come a day when he can no longer hear the music he loves. Beethoven began to try to figure out a way to continue to have the music he loved, and he came up with a way to play the piano and “hear” the way 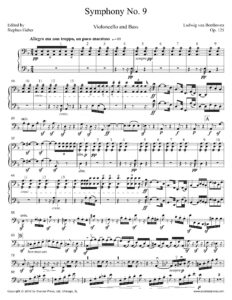 his music sounded…vibrations. Vibrations, you say!! Yes!! Beethoven began to experiment on what vibrations occurred when each note was placed. I find that amazing. To be able to distinguish between the vibration B-flat makes as opposed to F-sharp. Any musician can easily tell you which note is which, but could they explain the vibration each one makes. I seriously doubt it.

Beethoven not only learned to distinguish the vibrations for each note, but he could quickly put them together in an order that made music that was truly beautiful. No sour notes in his music. No, his music was perfection, but exactly how did he do it. Well, he replicated “hearing” using vibrations by attaching a small rod to the piano and biting down on it while he played. Because our eardrums vibrate from sound, the vibration on Beethoven’s jaw imitated hearing while he was hearing impaired. Totally amazing!! This experiment was the start to the official alternate hearing method called bone conduction. And now you know where some of our greatest innovations in hearing came from.