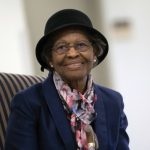 I liked Mathematics in school and I was pretty good at it, but I can’t say that I had the mind of a great mathematician. As to being able to invent something, or create something of great mathematical value, I don’t know if my mind worked in that direction. The really great inventions take an extraordinary mind…one like that of Gladys Mae West (née Brown), an American mathematician who was known for her contributions to the mathematical modeling of the shape of the Earth, and her work on the development of the satellite geodesy models that were eventually incorporated into the Global Positioning System (GPS). I doubt if anyone alive today can say they don’t know about GPS. It has been a fundamental part of life since 1973, although most of us knew nothing about it then.

West was born in 1930 in Sutherland, Virginia, south of Richmond. Her family was an African-American farming family in a community of sharecroppers. Her mother worked at a tobacco factory, and her father was a farmer, who also worked for the railroad. West knew she did not want for follow in her parents’ footsteps, and she knew that the only way out was to get a really good education. Family money was not going to be her way to college, so she knew she would need scholarships. Fortunately, the high school she attended gifted the top two students each year with a full-ride scholarship to Virginia State College (University at that time), a historically black public university. West worked hard and graduated in 1948 with the title of valedictorian. With the goal of graduating as one of the top two students behind her, West was a little unsure of just what to do next. She had never given much thought to what she would study…if she got to go to college, but she really had her pick, because she had excelled in all of her courses. Her teachers and counselors encouraged her to major in science or math because of their difficulty. West chose to study mathematics, a normally male dominated subject at her college. She also became a member of the Alpha Kappa Alpha sorority. In 1952, she graduated with a Bachelor of Science in Mathematics. Following her graduation, West taught math and science at Waverly, Virginia for two years. Then returned to VSU to complete her Master of Mathematics degree. She graduated in 1955, and briefly took another teaching position in Martinsville, Virginia.

Her big break came in 1956 when she was hired to work at the Naval Proving Ground located in Dahlgren, Virginia. These days it’s called the Naval Surface Warfare Center. West started her job as the second black woman ever hired and one of only four black employees. West was a programmer in the Naval Surface Warfare Center Dahlgren Division for large-scale computers and a project manager for data-processing systems used in the analysis of satellite data. While she was working there, she was also in the process of earning a second master’s degree in public administration from the University of Oklahoma.

West was dedicated to her work. In the early 1960s, she participated in an award-winning astronomical study that proved the regularity of Pluto’s motion relative to Neptune. She also began to analyze data from satellites, putting together altimeter models of the Earth’s shape. She became project manager for the Seasat radar altimetry project, the first satellite that could remotely sense oceans. West consistently put in extra hours, cutting her team’s processing time in half. This extra time spent, earner her a commendation in 1979.

In the mid-1970s she began working on an IBM computer to deliver increasingly precise calculations to model the shape of the Earth…an ellipsoid with irregularities, known as the geoid. She generated an extremely accurate model which required her to employ complex algorithms to account for variations in gravitational, tidal, and other forces that distort Earth’s shape. West’s data ultimately became the basis for the Global Positioning System (GPS), which we all know about today. She was inducted into the United States Air Force Hall of Fame in 2018. Today, West lives quietly with her husband, Ira. They have 3 children and 7 grandchildren.