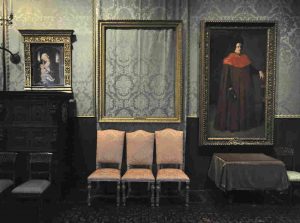 If you watch cop shows at all, you will know that if they are right, most crimes are solved…and in short order too. Of course, most of us realize that isn’t exactly the case. While I like to think most crimes are solved, there are still a great number of them that take years to solve and sometimes they remain unsolved indefinitely, if not forever. I suppose those would be the perfect crimes, but it is sad to think that a criminal gets away with a crime, no matter what it is. Such appears to be the case in the March 18, 1990 theft of 13 masterpieces worth $500 million from Boston’s Isabella Stewart Gardner Museum. The theft took place 26 years ago, and has never been solved, and the pieces are still missing.

The museum was closed, and the night watchman, Richard Abath was on duty. Boston’s Saint Patrick’s Day revelers were finishing their last drinks before going home to sleep it off. Two police officers showed up at the door of the museum and rang the buzzer at 1:24 am. When the watchman opened the door, they informed him that they were there about the disturbance. The night watchman had been trained to first call Boston police headquarters to confirm officers’ names and badge numbers, but 23 year old Abath, who was an aspiring rock musician, and had given his notice days earlier, pressed a button to let the pair inside. The uniformed men ordered Abath to summon his fellow guard, 25 year old Randy Hestand, to the lobby.

When one of the officers said that Abath looked like someone they had a warrant out on, he broke protocol a second time when he left the desk, where the only panic button was, and obeyed their command to show them some identification. They handcuffed him and the arriving Hestand, who was filling in for a sick colleague and working the night shift for the first time. When both men were handcuffed, the men in police uniforms informed the guards, “This is a robbery, gentlemen.” Using duct tape, the intruders wrapped the guards like mummies, even covering Abath’s shoulder length curly hair and left them in the basement where they handcuffed Hestand to a sink and Abath to a workbench 40 yards away.

Then the thieves ransacked the museum, which had been a gift to the people of Boston in 1903, given by philanthropist, Isabella Stewart Gardner. Had they gone in and strategically taken valuable items, the robbery might have made sense, I suppose, but while they took $500 million worth of art, they also destroyed so much. They smashed gilded painting frames onto marble floors and sliced canvasses from their wooden backings. The robbers left an empty frame on the office chair of the museum’s security director and removed the recording tape from security system’s camera before departing 81 minutes after their arrival in a dark colored hatchback that disappeared into the night.

The two night watchmen were found the next morning, but the 13 pieces of artwork worth $500 million were gone. The most expensive piece was a painting titled “The Concert,” by Johannes Vermeer…one of only 36 known paintings by the Dutch master. The robbers got away with a sketch and two paintings by Rembrandt, including his only known seascape, “Storm on the Sea of Galilee.” They also took a Govaert Flinck landscape, Edouard Manet’s “Chez Tortoni,” five watercolors and sketches by Edgar Degas, a finial eagle that sat atop a Napoleonic flag that the thieves could not unscrew from the wall and an ancient Chinese vase. Strangely, the robbers had left untouched the museum’s most valuable painting, Titian’s “The Rape of Europa,” but an unwound coat hanger found near the candy machine suggested that they had also taken chocolate bars. It is suspected that the 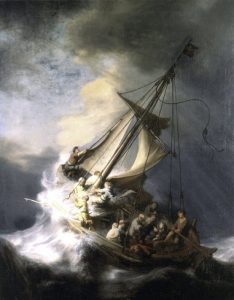 men were working off of a specific list of items contracted for in advance by a black market collector outside of the United States. Latin American drug cartels, Irish Republican Army militants and even Vatican operatives were floated as suspects. Suspicion also fell on notorious Boston mobster James “Whitey” Bulger, but he was searching for whomever committed the audacious crime on his home “turf” as well so that he could exact a cut. The FBI investigation into Abath, who was the only person tracked by motion sensors in the gallery from which the Manet was swiped, did not yield any answers.

The case has grown cold, and unless some kind of new clues surface, it will likely remain unsolved. The frames that held the stolen paintings remain empty to this day, and still hang in the Isabella Stewart Gardner Museum, in the same places they were then…waiting for their lost painting to hopefully be returned someday. Time will tell.