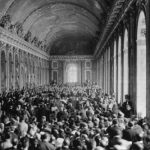 One would expect that after being defeated in a war, it would be understood that you don’t go up against the same adversary again, but apparently this concept was lost on Adolf Hitler. We all know who Hitler was, and that he was bent on taking over the world. There were things about him that had the people of Germany fooled into thinking that he was going to be a great leader, until his Nazi swastika became the symbol of hate and Anti-Semitism. In late June 1914, Archduke Franz Ferdinand of Austria was assassinated by a Serbian nationalist in Sarajevo, Bosnia. An escalation of threats and mobilization orders followed the incident, leading by mid-August to the outbreak of World War I, which pitted Germany, Austria-Hungary and the Ottoman Empire, called the Central Powers, against Great Britain, France, Russia, Italy and Japan, the Allied Powers. The Allies were joined after 1917 by the United States. The Great War, as it was then known, went on for four long years, and saw unprecedented levels of death and destruction, due mostly to grueling trench warfare and the introduction of modern weaponry such as machine guns, tanks and chemical weapons. By the time World War I ended in the defeat of the Central Powers in November 1918, more than 9 million soldiers had been killed and 21 million more were wounded. It makes me cringe to think of the good men lost because of hatred.

In July 1919, just eight months after the end of World War I, the Treaty of Versailles was signed, calling for stiff war reparation payments and other punishing peace terms for a defeated Germany. Having been forced to sign the treaty, the German delegation to the peace conference indicated its attitude by breaking the ceremonial pen. In my mind, that was indicative of what was to come. They felt like they shouldn’t have had to surrender or sign such an agreement, and they were telling the world that at some point they would break that treaty. As dictated by the Treaty of Versailles, Germany’s military forces were reduced to insignificance and the Rhineland, along the western border of Germany, was to be demilitarized. Nazi leader Adolf Hitler, well known for his hatred of authority, and for his lack of good sense as it turns out, would violate the Treaty of Versailles and the Locarno Pact by sending German military forces into the Rhineland just four years later.

By 1923, Adolf Hitler and the Nazi Party had seized full power in Germany, removing the rights of the people to have any say in their lives or in government. Hitler promised vengeance against the Allied nations that had 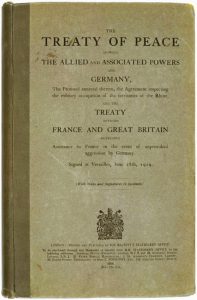 forced the Treaty of Versailles on the German people. In my opinion, the German people had nothing to do with it. The problem with the Treaty of Versailles and the Locarno Pact was Hitler’s on dislike of authority. In 1935, Hitler unilaterally canceled the military clauses of the treaty and in March 1936 denounced the Locarno Pact and began the remilitarizing of the Rhineland. Two years later, Nazi Germany burst out of its territories, absorbing Austria and portions of Czechoslovakia. In 1939, Hitler invaded Poland, leading to the outbreak of World War II in Europe. Hitler would be defeated in World War II, just as he was in World War I, and his suicide and complete show of cowardice would prove that he was not only hateful, but incredibly stupid as well.