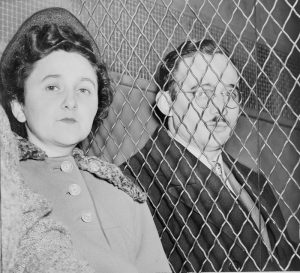 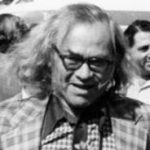 I could never begin to understand how an American citizen could be so evil as to commit espionage against the United States by selling secrets to other countries, but then again, that is not something that is so unusual these days. In the 1940’s, however, it wasn’t so common. Nevertheless, Julius Rosenberg and Ethel Rosenberg were American citizens who were convicted of spying on behalf of the Soviet Union. The Rosenbergs were accused of providing top-secret information about radar, sonar, jet propulsion engines, and valuable nuclear weapon designs to the Soviet Union at a time when the United States was the only country in the world with nuclear weapons. Imagine if we could go back to that time. The Rosenbergs were convicted of espionage in 1951, and they were executed by the federal government of the United States in 1953 in the Sing Sing correctional facility in Ossining, New York. They were the first American civilians to be executed for such charges and the first to suffer that penalty during peacetime.

On March 6, 1951, the trial of Ethel and Julius Rosenberg began in New York Southern District federal court. Presiding over the espionage trial was Judge Irving R Kaufman. The couple was charged with espionage, rather than treason, because the latter could not be charged since the United States was not at war with the Soviet Union at the time of the crime’s commission. The father and son team of Emanuel and Alexander Bloch defended the Rosenbergs and their co-defendant, Morton Sobell. Roy Cohn, best known for his association with Senator Joseph McCarthy prosecuted the trio.

The Rosenbergs and Sobell, along with other co-conspirators were directly responsible for the beginning of the Cold War. Julius Rosenberg’s brother-in-law, David Greenglass was a machinist at Los Alamos, where America developed the atomic bomb. Rosenberg was a member of the American Communist Party and was fired from his government job during the Red Scare. According to Greenglass, Rosenberg asked him to pass highly confidential instructions on making atomic weapons to the Soviet Union. In compliance, Greenglass gave the information to Harry Gold, who gave it to the Russians. The Soviets exploded their first atomic bomb in September 1949, effectively starting the Cold War, based on information, including that from Greenglass, they had obtained from spies.

The confession of Greenglass was the only direct evidence of the Rosenberg’s involvement. The left-wing 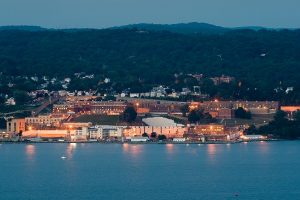 community believed that the Rosenbergs were prosecuted because of their membership in the Communist Party. The Rosenbergs became the cause of leftists throughout the nation. The rest of their family, including their two sons declared the innocence of the Rosenbergs for years. The trial lasted nearly a month…ending on April 4, 1951. Sobell received a thirty year sentence. Greenglass got fifteen years for his cooperation. Reportedly, the Rosenbergs were offered a deal in which their death sentences would be commuted in return for an admission of their guilt. They refused and were executed. In 2008, the only surviving defendant, Morton Sobell, admitted that he was a Soviet spy and implicated Julius Rosenberg in industrial and military espionage.