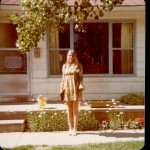 The length of women’s skirts have varied over the years, and I happen to know that when the mini-skirt came out while I was in junior high school, my mom hated it. She never wanted her girls to wear them, nor did the other parents…so, many of the girls wore skirts rather than dresses, because skirts could be rolled up to make them shorter. It was a selling point for the skirt. I’m sure that if our mothers had known, we would have been in trouble, but that didn’t seem to matter. Of course, as style trends changed, my mom got used to the trends, and my younger sisters were allowed to wear mini-dresses too. I had a tendency to think that was really unfair, but I suppose I was the trailblazer that won them the right to wear those shorter dresses. I think my little sisters should thank me for that, don’t you? 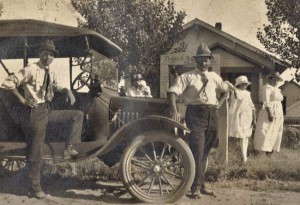 These trends have run their course over many generations, and the other day I was looking at some old pictures from my grandmother, Anna Schumacher Spencer’s album. There was a picture there that I can’t quite figure out, but one thing that jumps out at me is the older woman wearing a long dress, and the younger woman next to her in a dress that is just above her knees. The older woman in the picture doesn’t seem pleased with the younger woman. Of course, that could just be my perception of the situation, and not the reality of the situation. Still, I think that the women who started wearing those short skirts back then, were 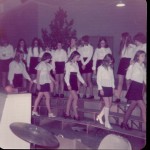 probably looked at as being loose…at least until they got used to the new trend.

I think that while my mom didn’t maybe look at me as being loose for wanting to wear short skirts, she probably thought of me as misguided. Nevertheless, when the trend became the normal, my sisters, and yes, me too, were allowed to wear those shorter skirts. I have to say that I still think that the skirt that hits me above the knees is one of the best looks for me, but maybe that’s just my opinion. Women who are vertically challenged, as I am, can look dumpy in the longer skirts, unless the skirt is cut just right. There again, that could just be my own opinion…or maybe I’m still a trendsetter.