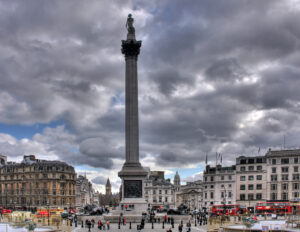 Protests are a common story these days, and the police are often kept busy for days trying to keep some kind of order. Not much has really changed in that arena. No nation is exempt from the possibility of violence breaking out because people feel they have been subjected to injustice…whether the facts bear out the belief or not. In 1926, miners across the United Kingdom went on strike. They were being subjected to an involuntary 13% wage cut, as well as an increase in weekly labor, and they were not planning to put up with it. When workers in other industries refused to work in solidarity with the striking miners, it led to a general strike. The work stoppage lasted nine days.

1926 was an unsettled year, with protests becoming quite common, especially 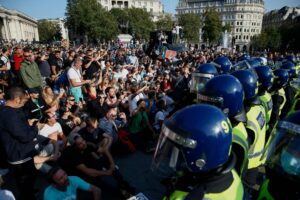 in London’s Trafalgar Square. As a result of the violence, the police wanted to set up a temporary police station, so they could keep an eye on things. The public would have none of it. Their outcry literally caused the police to drop the project. The problem, however, remained, so they knew that something had to be done. Finally, someone came up with a brilliant idea. That year, they built several large ornate light posts. One of the light posts was configured with the idea of housing what is most likely the world’s tiniest police station. This brilliant idea allowed the police to hide it, and their surveillance, in plain sight.

The police station pole was located inconspicuously at the south-east corner of Trafalgar Square. It is a rather

peculiar and often overlooked world record holder…Britain’s Smallest Police Station. Apparently this tiny box can accommodate up to two prisoners at a time, although its main purpose was to hold a single police officer. I guess you could say that it was a 1920’s version of the ring doorbell camera. It didn’t take video, but the officer inside could clearly watch the square. Once the light fitting was hollowed out, the builders installed a set of narrow windows in order to provide a vista across the main square. Also installed was a direct phone line back to Scotland Yard in case reinforcements were needed in times of trouble. In fact, whenever the police phone was picked up, the ornamental light fitting at the top of the box started to flash, alerting any nearby officers on duty that trouble was near. It was a brilliant idea, but as with all inventions, their usefulness lasts only until the next big thing comes along. Such was the case with the Trafalgar Square Light Pole Police Station. Eventually new technology made the little station obsolete. Today the pole is used for custodial storage.