The History Of The Old West 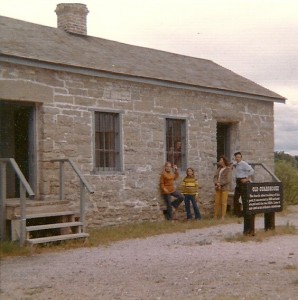 Many of the school children in Wyoming have had the unique opportunity to take a field trip to Fort Laramie, but most people didn’t go there as a family trip. My family, or I should say, my parents, liked a lot of things about the old west, especially any historical sites or trails. Over the years, we went to many of the sites around Wyoming and the surrounding states. Living in Casper, we have seen Fort Caspar, of course, but there have also been trips to Fort Laramie. One such trip, taken after I was married, and so not including my sister Cheryl or me…something that probably didn’t bother us then, but now, looking back, I’m sorry I didn’t get to go…mostly because Dad’s knowledge of the history of these places, and his love of teasing or role playing at these places always made things interesting. Dad would pretend to be one of the soldiers, or a trapper, or a shop keeper, so that he could pull us into the history of the place…hoping to pique our interest in the rich history of the area we live in. Most of the time, at least as we grew into our teens, his efforts failed to do much for us, other than maybe get a laugh if he was really acting funny, but as the years have gone by, I find myself very interested in the history of our great nation.

Fort Laramie, for example, was originally established as a private fur trading fort in 1834, but later evolved into the largest and best known military post on the Northern Plains, before it was abandoned in 1890. It was originally named Fort William after it’s founder William Sublette, and was purchased in 1841 by the American Fur Company and renamed Fort John. In 1949, it was purchased by the United States Army to protect the many wagon trains of migrant travelers on the Oregon Trail. At that time it was known as Fort John on the Laramie River, which later became Fort John-Laramie, and finally Fort Laramie. As a side note, the Laramie River was named after Jacques La Ramee. In 1815 or 1816, Jacques and a small group of fellow trappers settled in the area where Fort Laramie would later be located. He went out alone to trap in 1819 or 1820 and was never seen again. Arapaho Indians were subsequently accused of killing La Ramee and putting his body in a beaver dam. The river was named “Laramie” in his honor, and the name would later be given to the Laramie Mountains, the fort, and the towns of Laramie, Wyoming and Fort Laramie, Wyoming.

Today, I find all that history very interesting, but as a kid, history seemed like dry memorization of names and dates. Now I think I wouldn’t have minded living in those exciting times, or maybe just have the ability to travel back in time once in a while to see what The Old West was all about. I suppose I am a little too tech-minded to really have enjoyed that more primitive time for very long. Nevertheless, I guess my dad accomplished his goals with me. I do love the history of The Old West.