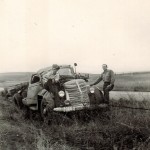 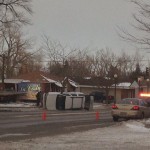 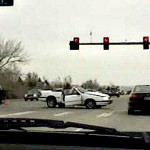 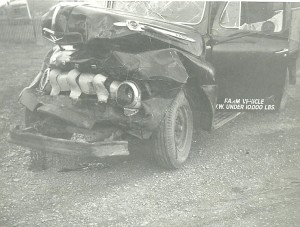 As a young family, my in-laws lived in Montana, and my father-in-law worked for the railroad. Their family was growing, and now they had 3 children, Marlyce, Debbe, and my future husband, Bob. My father-in-law was working for the railroad, and the family was living on railroad property.Things were going well enough, but in 1956, the decision was made to move the family from Dalin, Montana to Martinsville, Montana…neither of which still exist today, as near as I can tell, so unfortunately, I can’t say how long the trip was. That doesn’t really matter, because, any trip with three children under the age of 7 years, had to seem like an eternity. Nevertheless, this trip was about to get a little bit longer. They loaded their belongings into a 1951 Ford pickup truck, which was the first vehicle my father-in-law had ever owned, and it had been purchased brand new in 1951, so it was a nice vehicle. Everything loaded, they set out for Martinsville.

Along the way to Martinsville, a pickup pulled out in front of the 1951 Ford. The accident destroyed all their furniture and totaled the pickup. I can only imagine how awful that was. In those days, seat belts and car seats were unheard of, so I’m sure my in-laws thought they were all about to die. It was a devastating event, but the family was all ok, but, now they were stuck waiting for the police and tow truck, and had to figure out what to do next. The trip took just about the worst possible turn. I can hear the kids now. The girls were most likely crying because they were cold or hungry, and Bob being only 2 years old was either scared, or more likely curious…if I know him. It would be my guess that both of my in-laws had a massive headache from the trauma and worry, both for their family and for their future. 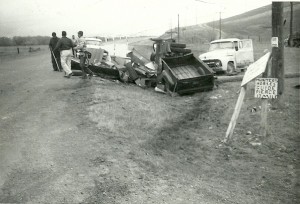 In the end, things turned out ok. The insurance money was enough to buy a 1953 Ford pickup and a 33 foot mobile home. I can’t imagine three kids in a 33 foot mobile home, but I’m sure they felt like it was practically a palace, considering the way things could have gone. Car accidents can conpletely devistate lives, but their little family was alive, and no one was hurt badly, so the rest of it was just stuff. If you can walk away from an accident like that in one piece, you thank the Lord, and count your many blessings.