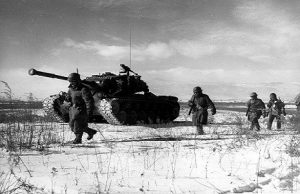 It happened during the Korean War. The First Marine Division was in the middle of heavy fighting in the area of Chosin Mountain Reservoir, and the temperatures were subfreezing. The marines had been fighting long enough to have run out of 60mm mortar ammo. That was not going to make for a successful battle, so the marines called for the 60mm mortar ammo, which had the code name “Tootsie Rolls.” The unfortunate mistake was that the radio operator, didn’t have the code sheets. The radio operator didn’t know what to do, since the request sounded so urgent, so he called in the order.

Now, just imagine…you are a marine in the middle of a battle, in freezing weather, our of ammo, and headquarters drops in pallet after pallet of Tootsie Rolls!! Well, who can resist Tootsie Rolls…right. So while it wasn’t ammunition, the pallets weren’t the ammunition he really needed, Tootsie Rolls did supply the calories the men needed. They weren’t exactly nutritious, they did give the men energy, which was needed at the time. It is also possible that the Tootsie Rolls helped to keep them warm in the freezing temperatures. They also learned they could use warmed Tootsie Rolls to plug bullet holes, sealing them as they refroze. Interesting idea.

The fighting had been going on for over two weeks. The 15,000 man division suffered 3,000 killed in action, 6,000 wounded and thousands of severe frostbite cases. The battle was a serious matter, but they accomplished their goal and destroyed several Chinese divisions in the process. Many credited their very survival to Tootsie Rolls. Surviving Marines called themselves “The Chosin Few.” 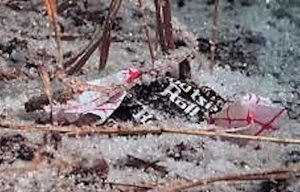 Still, the radio operator had made a serious error, and they couldn’t just let that big an error slide. I can picture it now. The jokes that the poor operator had to face. In fact they probably came up with a Tootsie Roll nickname for him, or maybe they went a different route. He might have been designated a hero for saving them with all those Tootsie Rolls…especially if they sent ammo when the error was brought to light. So, while you might not have known it, Tootsie Rolls hold significance with the Marine Corps. I guess now you know what. Some have even called them the “Tootsie Roll Marines.”