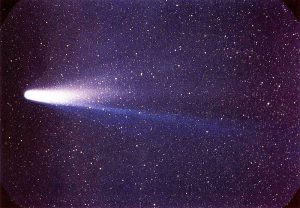 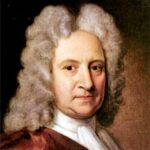 Halley’s comet, named after astronomer Edmond Halley, only passes by Earth every 76 years or so. These days, such an event would bring excitement, viewing parties, planned trips to nearby dark sights as far from the city lights as possible, but then we know much more about comets than the people of 1910, when Halley’s Comet visited. Of course, the internet wasn’t invented in 1910, nor were computers. People only had the news paper to get their news from. This was a big story. People were so excited, that telescope sales skyrocketed as the comet neared. Hotels even offered special deals, so people could gather on top of their roofs to watch the comet pass.

Of course, not everyone was pleased with the comet’s appearance. There were those who believed the shooting star would end civilization. That “brainstorm” was thanks to the mind of a French astronomer named Camille Flammarion, who believed the comet’s 24-million-mile long tail contained a poisonous cyanogen gas that “would impregnate the atmosphere and possibly snuff out all life on the planet” and and while the idea was totally crazy, many unsuspecting people believed the story and it caused chaos.

Part of the problem with misinformation is that some people…especially new media, known for the idea of sensationalistic stories that are scary enough or wild enough to sell papers, or in this day and age, airtime, whether the story is true, credible, or even honest. To the news media, truth is not the most important part of a story. You have to be able to catch the eyes, and hold the imaginations of the people or the story will quickly 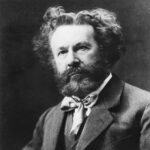 be relegated to the back of the paper. Unfortunately, The New York Times’ piece on Flammarion’s apocalyptic theory encouraged some less-trustworthy newspapers to run wild with the story. Following the story’s breaking, in addition to telescopes, people started ransacking stores for gas masks. Con men, or as we call them today, scammers made a killing by selling anti-comet pills, and some people worried the comet would “cause the Pacific to change basins with the Atlantic” and turn the world into “one heterogeneous mass of chaotic confusion.” Worried parishioners flocked to their churches, and according to science writer Matt Simon, people actually sealed up their keyholes to keep poison out of their homes.

When the event was over, and the comet had passed, however, the gas masks proved totally worthless, because…well, there was no poison. Sure, a few people blamed the meteor for King Edward VII’s death, but there’s not a lot of science backing that claim. My guess is that the media was behind that theory too, as a way of keeping the panic alive. Interestingly, Mark Twain also passed away Of a heart attack, from a known heart condition, as the comet flew overhead, but he had refused medical help for the condition saying that, “I came in with Halley’s Comet in 1835. It is coming again next year, and I expect to go out with it. It will be the greatest disappointment of my life if I don’t go out with Halley’s Comet. The Almighty has said, no doubt: “Now here are these two unaccountable freaks; they came in together, they must go out together.” Twain had been born as the comet last flew by, in 1835.

Twain and King Edward VII were not the only death that the comet can take credit for, or should we say be associated with. The media sensationalism caused a number of people to commit suicide out of fear of the supposed coming chemical chaotic after effects of the tail of the comet. People were worried about dying a slow 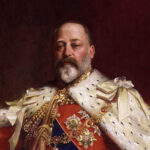 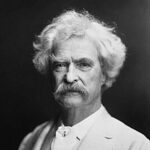 and painful death by way of the poisonous cyanogen gas that was predicted by Flammarion and The New York Times. Their combined irresponsibility cause such horrible chaos, and yet they walked off scot free, while lives were lost due to their blatant irresponsibility. Most people know that you don’t stand up and yell, “Fire!!” in a crowded theater, but somehow they totally miss the point when it comes to scaring people just to sell a newspaper. The Earth’s May 19, 1910 passing through the tail of Halley’s Comet, while a very cool event, was nothing more than just that…a very cool event.