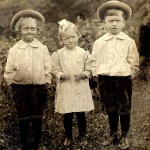 In looking at some pictures in my grandmother’s photo album, I looked several times at a picture of two little boys and a little girl. I have no idea who they are, but since they are in my grandmother’s album, I assume that they are related in some way. The one thing that I am sure of is that these kids are as cute as they can be. They remind me a little bit of the television show, The Little Rascals. Maybe it is their clothes, or maybe it is the expressions on their little faces. They are not an exact look alike group, but they are close enough to remind me of that old television show. 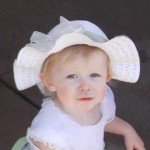 someone else…from a completely different time. Of course, these kids don’t look exactly like the kids on The Little Rascals, but the little girl does remind me to a degree of my cute little grand niece, Aurora, who is the daughter on my nephew, Ryan and his wife Chelsea. I have wondered who Aurora took after. Her brother looks much like my sister Allyn, who is his grandma, and his daddy, but Aurora…simply looked like Aurora…until now. When I looked at this picture yesterday, I looked more at the little girl, than the boys. No she is not exactly like Aurora, but she is very similar. I think Aurora looks a lot like her mommy, but maybe just a little bit of her looks could be from this cute little relative from times past in her heritage.

This little group of cuties has captivated my imagination for a while now. 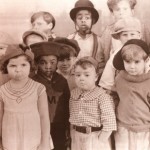 I can picture them in the very adventures that the original Little Rascals had. They almost look like they are pretending that they are The Little Rascals, but the television had not been invented yet, so they had not seen the show. Maybe the show was really taken from the cute little faces that kids can make, because that was one of the things that made the show so popular. Kids are notorious for making little faces that display anger, irritation, or surprise, and those were the types of faces you saw on The Little Rascals, and the same types of faces I see on Aurora and other kids her age today. And that is another thing that helps to remind me of this little girl and the kids in The Little Rascals.