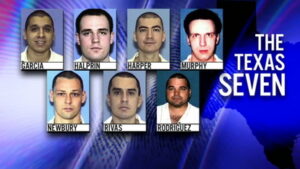 Maybe they were just wanting to be home for Christmas, and not knowing exactly how long it would take…while hiding out from the law, that is…the Texas Seven decided to get a jump start on the journey. No, probably not. It wasn’t Christmas with loved ones that was on their minds…it was freedom. On December 13, 2000, seven prisoners dubbed the “Texas Seven” by the media, broke out of maximum-security prison in South Texas, setting off a massive six-week manhunt. The prisoners were Joseph Christopher Garcia, Randy Ethan Halprin, Larry James Harper, Patrick Henry Murphy Jr, Donald Keith Newbury, George Angel Rivas Jr, and Michael Anthony Rodriguez. The escapees overpowered civilian employees and prison guards in the maintenance shop where they worked and stole clothing, guns, and a vehicle. The men left a note saying: “You haven’t heard the last of us yet,” and they were right. These men were convicted of crimes like murder, rape, and robbery. They were set to be executed soon, so they had nothing to lose.

These were not the kind of people that anyone wanted to have running around the state…or anywhere outside of prison walls. Soon after escaping from the Connally Unit lockup in Kenedy, Texas, the fugitives picked up another getaway vehicle. This one provided by the father of one of the men. They robbed a Radio Shack store in Pearland, Texas, coming out with cash and police scanners. On Christmas Eve, the escapees struck a sporting-goods store in Irving, Texas, where they stole a large amount of cash and weapons. In the process, the men killed police officer Aubrey Hawkins, shooting him multiple times with multiple weapons and running him over. Now they really had nothing to lose. Now, they were cop killers on top of everything else. It looked like it was time to get out of Dodge…or in this case, Texas.

The Texas Seven headed to Colorado, where they purchased a motor home and told people they were Christian missionaries. They rented a spot at a trailer park near Woodland Park, Colorado. They were there about a month before things started to fall apart. On January 22, 2001, after seeing the “Texas Seven” profiled on the TV program America’s Most Wanted, someone tipped off the police to the group of seven “missionaries” near Woodland Park. During the raid, ringleader George Rivas was captured along with three of the other men. Larry James Harper decided that he was not going back to prison, so he committed suicide after being surrounded by

police. Two days later, law enforcement officials closed in on the two remaining escapees at a hotel in Colorado Springs. A standoff ensued, during which the fugitives conducted phone interviews with a TV news station and claimed their escape was a protest against Texas’ criminal justice system. Someone always has to add a bit of drama to justify their new crimes. There was no evidence indicating their claim was justified. The men then surrendered to authorities. Their crime spree was over. Of the six remaining, four have since been executed. Randy Ethan Halprin and Patrick Henry Murphy Jr are currently back at Polunsky Unit in Livingston, Texas on Death Row awaiting execution.