Like most people, I can tell you exactly where I was and what I was doing when the news came out about the terrorist attacks on September 11, 2001. I was at home, my grandchildren were just arriving to await the time to go to school. I was getting ready for work and to take them to school. Kevin, my daughter Corrie’s husband, called to tell us that there were fires at the World Trade Center and the Pentagon. I remember saying, “How can that be? They are nowhere near each other!” I couldn’t wrap my mind around how that could be, until we learned that it was planes and terrorist attacks.

I remember feeling stunned all day, and for the next several days as well. Thoughts of all the people killed in the attack haunted me all day. I felt a deep sense of dread and pain for the families who had lost so much. Like most Americans, I wished I had a way to help, but I didn’t know of one, and I was needed at home. So I prayed, constantly for the people still trapped, as well as the dead, dying, their families, and our country.

As I look back on all that horror today, and listen to the people who complain about airport security, I have to wonder what they are thinking. It was complacency that opened our country up for those attacks. And it will be complacency that will bring them on again. If we are going to protect ourselves, and our country, we must stay ever alert.

And when I hear people saying that we should not profile those we search, I say, “Wake up!!” If we go into most other countries, we are looked at differently than their citizens. And while I am not racist, I feel like anyone who looks like they have an Arab background, needs to understand that if they are not a terrorist…then, we are doing this to protect them too. The rules have changed so much since that day, 10 years ago, when we found out the we can’t afford to be so trusting. We all need to be more understanding of those trying to protect us, and stop trying to make their lives more difficult. They are, after all, just doing their job like everyone else. 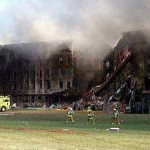 In a perfect world, none of this would be necessary, but in a perfect world, we would not have lost 2,819 people in one day, as the result of one planned terrorist attack. We don’t live in a perfect world, unfortunately, and there are people out there that hate us. I think we owe it to those who lost their lives to do our very best to make sure it never happens again.

Today is the 10th anniversary of the September 11th terrorist attacks. The memory of those attacks and those who lost their lives should be as vivid in our memories as they were 10 years ago, or 10 years from now. We must never forget!!