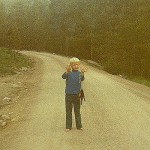 It seems to be the way of every fisherman to tell tales of the big one that got away, or just how many fish they caught. It also seems like those fish grow in size and in number with each telling of the tale. I think that just about every fisherman has engaged in such tales, and it appears that my brother-in-law, Ron is no exception. Now, I can’t say for sure exactly what he was saying when this picture was taken, but the fish hanging from his shoulder give me a pretty good idea. It would seem that age is not a factor when it comes to those fish stories, because Ron appears to be working hard to make his point. Of course, that seems to be the way it is when these guys are making up their fish story…they assume you won’t believe them anyway, so they really doctor up the story to start with, and depending on who they go fishing with, they could be learning from the masters of fish stories.

Ron loves to go camping and, as far as I know, still likes fishing today, as well as hunting, but I don’t know if he is still into telling the wild tales that often go along with those sports. It would not be surprising to me if he still told some whoppers, I mean after all, it is the sport for those wild tales. I have to wonder how far from reality most of the big fish stories really are. If you ask most fishermen, they seem to have all caught…or at least had 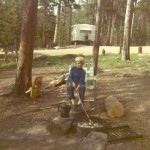 a nibble on the line from a fish the size of a small shark, and who’s to say it isn’t so…right?

And, the fishing trip isn’t all about the fishing, it’s about camping and great times with good friends too. There is just something about sitting around the campfire, talking and telling those stories, while roasting marshmallows, that makes for the most enjoyable evening. Ron loved the whole marshmallow thing too. So, after a hard day of fishing, he would load up on those gooey, melted marshmallows while soaking his feet in a pan to get the dirt off from a long day in the woods. Awww!! Now, that’s what I call relaxing.