And Then, The Women

When we look at the reasons that the United States entered World War II, we think of the Japanese attack on Pearl Harbor, and we would be correct, but there was another dictator who committed so many atrocities during and before World War II, that it seems to me inevitable that we would have had to make that decision sooner or later. Adolf Hitler was a German politician, the leader of the Nazi Party, elected Chancellor of Germany from 1933 to 1945, and Führer, or leader of Nazi Germany from 1934 to 1945. One of his worst acts as Führer of Nazi Germany, was when he initiated World War II in Europe with the invasion of Poland in September 1939 and the worst act was, of course, the Holocaust.

During the Holocaust, an insane Hitler, decided that the Jewish people were Untermenschen, or sub-human and socially undesirable, and determined in his heart to kill them. His first move in that direction was to begin rounding them up and placing them in prison camps. And one of the worst was Auschwitz. For a time, Hitler only placed the men in Auschwitz, but then on March 26, 1942, the first women prisoners arrived at Auschwitz.

Of course, Hitler’s intent was always to put the prisoners to death, but he decided to use them in whatever capacity he felt necessary and useful, before the time came to kill them. Since he considered the sub-human, he felt no guilt making them slaves. The prisoners were forced to work long hours, and were also used for medical experimentation. When the prisoners entered the camp, they were strip searched, male and female alike, and forced to stand naked in front of the guards during that time. It didn’t matter how cold they were. They did not count in the eyes of the Germans, because they were Untermenschen…sub-human. As a woman, I can only imagine how these first female prisoners must have felt. They were already very much aware that the Germans did not respect their race, so why would they feel differently about the fact that they were women. It would have been a very scary time. I’m sure they did not know if they would be raped and then killed, or what would happen to them. Their entry into the prison camp had already proven that they were nothing in the eyes of their captors. 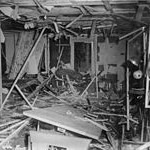 Between 1939 and 1945, there were many plans to try to assassinate Hitler. The most well known, Operation Valkyrie, which came from within Germany and was at least partly driven by the increasing prospect of a German defeat in the war. On July 20, 1944, Claus von Stauffenberg planted a bomb in one of Hitler’s headquarters…known as the Wolf’s Lair at Rustenburg. Hitler survived because staff officer Heinz Brandt moved the briefcase containing the bomb behind a leg of the heavy conference table. When the bomb exploded, the table deflected much of the blast. Later, Hitler ordered savage reprisals resulting in the execution of more than 4,900 people. In the end, he would take his own life, in an effort not to be taken alive. Not a bad thing if you ask me, because the world is truly well rid of him.