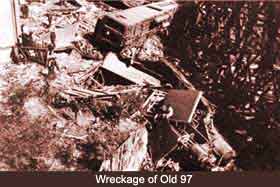 People always seem to be in a hurry. We encounter cars that fly past us trying to get to their destination on time, when they really didn’t allow enough time for the trip. We are all guilty of running late, and even of speeding to make it on time, and as we all know, sometimes our habit of running late and being in such a hurry, can have bad consequences. Sometimes the consequences of running late can be devastating. Such was the case with Old 97, a mail train for Southern Railways. While it’s number was simply number 97, and it was officially known as the Fast Mail, its nickname was Old 97. The train ran from Washington DC to Atlanta, Georgia. On September 27, 1903 it was en route from Monroe, Virginia, to Spencer, North Carolina when disaster struck…or rather was forced upon the ill fated train.

When the train arrived in Monroe, it switched train crews and when it left Monroe there were 17 people on board. The train personnel included Joseph A Broady who was the engineer, nicknamed “Steve” by his friends, John Blair was the conductor, A C Clapp was the fireman, John Hodge was a student fireman, and James Robert Moody was the flagman. Also aboard were mail clerks, including J L Thompson, Scott Chambers, Daniel Flory, Paul Argenbright, Lewis Spies, Frank Brooks, Percival Indermauer, Charles Reames, Jennings Dunlap, Napoleon Maupin, J H Thompson, and W R Pinckney, who was an express messenger.

As they left Monroe, Old 97’s engineer, 33 year old Broady found himself running late, and in a hurry to get the train back on schedule. When the train pulled into Lynchburg, VA, Wentworth Armistead, who was a safe locker boarded the train so at that time there were 18 men aboard. The train consisted of four cars, and Broady was operating the train at high speed in order to stay on schedule and arrive at Spencer on time. You see, Fast Mail had a reputation for never being late…and a contract that included a fine if they were. Old 97 was behind schedule when it left Washington, DC and was one hour late when it arrived in Monroe, Virginia. All that was unacceptable, but Southern Railways and Engineer Broady were about to discover two things. The first is that 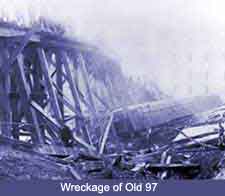 it is always best to stay on schedule, when a schedule is an important part of your job. The second is that there are far worse things than being late.

By the time Old 97 reached the Stillhouse Trestle near Danville, Virginia, Broady realized, with a horrible sense of dread and impending doom, that he did not have enough air pressure to slow the train for Stillhouse’s upcoming curved trestle. He tried, in vain to slow the train down by reversing the engine to lock the wheels, but Old 97 vaulted off the trestle, and 11 people were killed. Nine men of the eleven who died, were killed instantly. Seven men were injured. Among the deceased were the engineer Broady, conductor Blair, and flagman Moody. The bodies of both firemen were recovered, but they were mangled so badly they were unrecognizable. There were several survivors to the wreck who believed they survived because they jumped from the train just before the fatal plunge. Among the three survivors was an individual named J Harris Thompson of Lexington. Harris was a mail-clerk who served on the Southern Railroad. He later retired on May 1, 1941. W R Pinckney, the express messenger who also survived went home, located in Charlotte, North Carolina, and immediately resigned after the experience. Two other survivors included Jennings J Dunlap, and M C Maupin. These two men did not resign and continued their work, but started in new departments. Dunlap went to work on a train that ran between Washington and Charlotte, while Maupin worked at the Charlotte union station. The horrible pictures of the aftermath of the crash taken from above the scene ran in newspapers across the country.

At Monroe, Broady was instructed to get the Fast Mail to Spencer, 166 miles away…on time. The scheduled running time from Monroe to Spencer was four hours and fifteen minutes at an average speed of approximately 39 miles per hour. In order to make up the one hour delay, the train’s average speed would have to be at least 51 miles per hour. Broady was ordered to maintain speed through Franklin Junction, an intermediate stop normally made during the run. This was a time when train wrecks were not uncommon, but the day after the wreck, Southern Railway’s Vice President stated that “The train consisted of two postal cars, one express and one baggage car for the storage of mail… Eyewitnesses said the train was approaching the trestle at speeds of 30 to 35 miles an hour.” The Southern Railway placed blame for the wreck on engineer Broady, denying that he 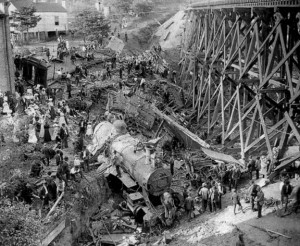 had been ordered to run as fast as possible to maintain the schedule. The railroad also claimed he descended the grade leading to Stillhouse Trestle at a speed of more than 70 miles per hour. Several eyewitnesses to the wreck, however, stated that the speed was probably around 50 miles per hour. In all likelihood, the railroad was at least partially to blame, as they had a lucrative contract with the US Post Office to haul mail…a contract that did include a penalty clause for each minute the train was late into Spencer. It is probably safe to conclude that the engineers piloting the Fast Mail were always under pressure to stay on time so the railroad would not be penalized for late mail delivery. And being under pressure can be deadly.