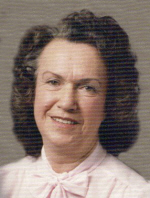 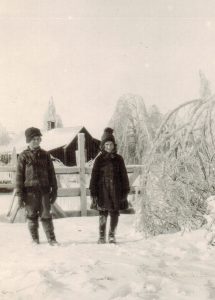 Where Were You When Mount Saint Helens Blew? 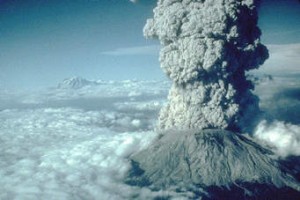 With the eruption and possible explosion of the Kilauea volcano in Hawaii, my thoughts are drawn back 38 years to another mountain…Mount Saint Helens. The scientists said that an explosive eruption was imminent. The mountain had been swelling up with internal pressure from the gasses deep in the earth. Still, some people didn’t believe the mountain would ever hurt them, and many just couldn’t wrap their head around the possibility that it might explode. So, some people stayed in their homes in the area. It would prove to be a fatal mistake.

It’s strange that we are able to associate things in life with major events in recent history. Many of us can say where we were when we learned of President Kennedy’s assassination, or when 9-11 took place. It is a moment that is embedded in our memories for all time. That morning as the ash rolled into our area, I was getting into my car to go to town. It looked like dust on my car, a very thick layer of dust. Of course, it wasn’t dust, it was volcanic 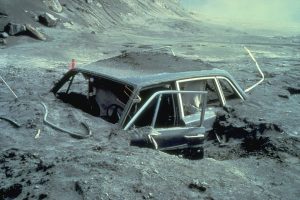 ash. It had never occurred to me that volcanic ash might affect me, but here I was, needing to wash the ash off of my car, so it was not damaged.

My cousin, Shirley, who lives in Washington, said she and her family were in Spokane. She saw a black cloud coming their way, and so she turned on the radio, to see what was going on. She immediately started yelling to the teachers and students from Saint Matthews school, who were at an end of the year baseball game. Every one scrambled to get their belongings, and headed back to the Church, before heading for home. Navigation became difficult. They had to watch the curb on the side of the streets to know where they were. It was a long drive home. They held their breath from the truck to the house, to protect their lungs, and watched the street lights come on. Shirley went out on the front porch and took pictures, 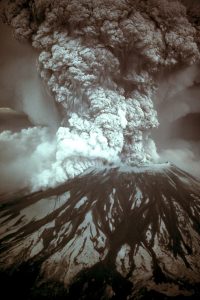 before retreating back to the safety of her house. They were forced to stay in the house for about a week, before it was safe to out again. Many safety precautions were in place, and people were told not to breathe the ash because of the glass in it.

Mount Saint Helens is located in the Cascade Range. On May 18, 1980, at 8:32am Pacific Standard Time, it erupted and blasted 1,300 feet off of its top, sending hot mud, gas, and ash running down its slopes. Approximately 57 people were killed directly from the blast, while 200 houses, 47 bridges, 15 miles of railways, and 185 miles of highway were destroyed. Two people were killed indirectly in accidents that resulted from poor visibility, and two more suffered fatal heart attacks from shoveling ash. The explosion sent plumes of dark gray ash some 60,000 feet in the air which blocked out the rays from the sun making it seem like night over eastern Washington. So…where were you when Mount Saint Helens blew?