The Town Built Of Wood 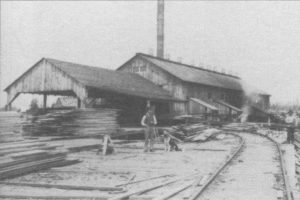 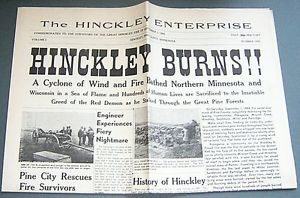 Every wildfire takes with it many victims. Humans, of course, are the most tragic, but they also take animals, homes, and plant life. When a fire gets out of control, devastation will soon follow. Often, all we think about is the loss, and that is a terrible thing, but sometimes something happens that brings a degree of victory and elation to an otherwise horrible situation. Such was the case in the September 1, 1894 Hinckley, Minnesota fire. The loss of life was devastating, with some accounts saying 440 and others saying 418…partly because the Indians weren’t counted in that amount, and partly because there were people who were never found.

The upper Midwest of the United States was a wooded area, rich in timber. Hinckley was a lumber and rail town, that had been built along the Grindstone River in Minnesota near the Wisconsin border. The main industry was the lumber business, and the slash cutting technique left behind it large amounts of wood debris. The town was nicknamed The Town Built Of Wood. Little did they know what a tragic nickname that would turn out to be. The lumber yards were built quite close to the railroad tracks, and the sparks from the 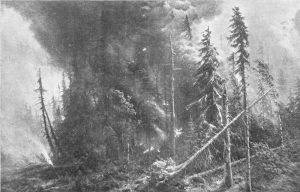 trains often set the wood debris on fire. Those fires were problematic, but no one expected the part the trains would play in 1894. That summer, a drought hit the Upper Midwest, making fires much more dangerous. The whole situation exploded on September 1, 1894, when fires near two rail lines south of Hinckley broke out, spreading north. When the raging fire reached the train depot, 350 of the residents got on a train to escape. The train passed right through flames, but reached safety in West Superior, Wisconsin. Were it not for this train, the loss of life would have been much higher. A number of the town’s residents took refuge in the swamps near town, but many of these people were killed, sadly some of them died by drowning. About 100 other residents fled to a gravel pit filled with water, and most of those people managed to survive. A train that was entering Hinckley from the north reversed direction to avoid the blaze. It still caught fire, and the only survivors were those who were able to jump from the train into a lake.

The fire burned 300,000 acres of town and forest, causing about $25 million in damages. In Hinckley, 228 people died, and another 200 in the surrounding areas, including 23 Ojibwa natives. It was a firestorm, with “as much force as an atomic bomb,” to quote a display at the town museum. Hinckley’s afternoon inferno also burned burned up five surrounding villages as it consumed over 400 square miles of kindling. It became known as the Great Hinckley Fire. A small group of statues in town represents survivors in the gravel pit. The Fire Monument and mass grave is on Fire Monument Road, very near the current interstate. Mass graves of 248 people are 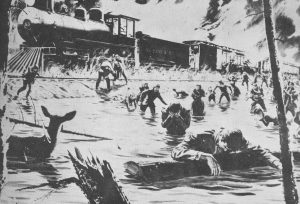 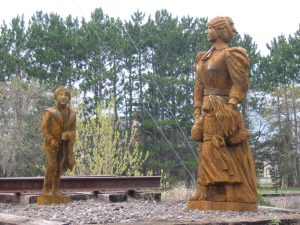 in lumpy mounds just behind the marker, dedicated in 1900 to the pioneers of civilization in Minnesota. Boston Corbett, killer of Abe Lincoln’s killer, is said to have left his “hole-in-the-ground home” in Kansas and died in the Great Hinckley Fire, in the neighboring town of Neodesha. The town of Hinckley has decided that the nickname The Town Built Of Wood is not one they want anymore, and their current slogan is “Relax…Have Fun!”