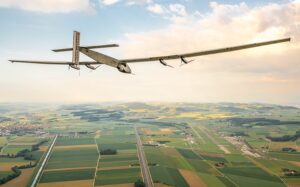 We are all used to alternative forms of energy these days. From electric cars to solar heating to wind energy, things have changed some. One thing I had never heard of before, however, is a solar-powered airplane. Of course, the plane was built to promote green energy, and I don’t personally think that green energy is a totally feasible option…sorry if anyone disagrees. Nevertheless, someone came up with the idea of using solar energy for an airplane. I have to admit that the idea of a plane operating totally on solar energy is something that would make me a little apprehensive, nevertheless, one was developed. And it was successful too. A solar-powered airplane completing the 10th leg of it’s journey by landing in Arizona after a 16-hour flight from California in 2015. Now, admittedly, a normal plane could have made the trip in a couple of hours, so in that way, it was rather anticlimactic.

The plane was the brain-child of Bertrand Piccard, who dreamed of an airplane of perpetual endurance…able to fly day and night without fuel. With the construction of this plane, that dream had been realized, and with the flight of co-founder Andre Borschberg’s flight, history had been made. Still, who has 16 hours to make that flight, when you can drive it in 12 hours. The spindly, single-seat experimental aircraft, dubbed Solar Impulse 2, arrived in Phoenix shortly before 9pm, following a flight from San Francisco that took it over the Mojave 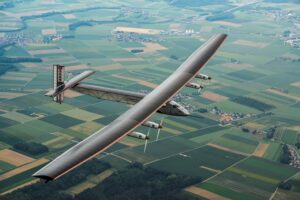 Desert. The solar plane’s pilots were required to take up meditation and hypnosis in training, so they could stay alert for long periods.

The plane’s capacity was one…just the pilot in the tiny cockpit. Andre Borschberg, who alternated with fellow pilot Bertrand Piccard at the controls for each segment of what they hope will be the first round-the-world solar-powered flight. “I made it to Phoenix, what an amazing flight over the Mojave desert,” Borschberg said in a Twitter post. Borschberg was the pilot for the Japan-to-Hawaii trip over the Pacific last July, staying airborne for nearly 118 hours…shattering the prior record of 76 hours for a non-stop, solo flight set back in 2006 by the late Steven Fossett in his Virgin Atlantic Global Flyer. Solar Impulse 2 set new duration and distance records for solar-powered flight too.

Not all was picture-perfect with the venture, however. The project was dealt a setback when the Solar Impulse suffered severe battery damage, requiring repairs and testing that grounded it in Hawaii for nine months. After repairs were made, Piccard completed the trans-Pacific crossing, reaching San Francisco after a flight of nearly three days, more than three times the 18 hours Amelia Earhart took to fly solo from Hawaii to California in the 1930s. In many ways, the project would seem to be a failure, but the one real success it had was that the 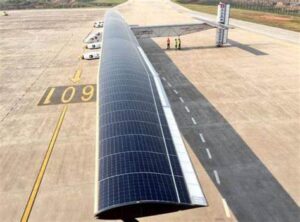 flights were made without fuel. Its four engines were powered solely by energy collected from more than 17,000 solar cells built into its wings. Surplus power is stored in four batteries during the day, to keep the plane aloft on extreme long-distance flights. The carbon-fiber plane, with a wingspan exceeding that of a Boeing 747 and the weight of a family car, is unlikely to set speed or altitude records. It can climb to 28,000 feet, and cruise at 34 to 62 miles per hour. It’s not something I think I would choose to fly in, but then it’s possible that down the road, when it isn’t an experimental plane, and it can carry more people, I might find myself traveling in just such a plane.