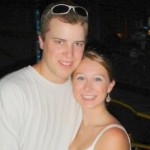 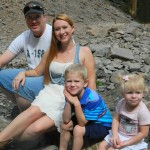 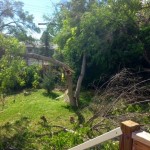 I went over to my mom’s house yesterday, for the first time since the recent snow storm that has simply devastated the area trees. Her front yard weathered the storm very well, in fact, only a couple of small branches fell there at all. Her back yard was a very different matter. The apple tree that I remember my parents planting years ago, had two trunks. It split right between them, taking half down to one side and the other half down to the other side…a total loss. Another tree dropped a huge branch…miraculously missing the entire fence that it laid down right next to. There are branches all over the yard, but it was the tree on the other side of Mom’s yard that hurt the most to look at.

It wasn’t that the tree on the other side had lost more branches than any other tree. It might have or it might not have, but that simply wasn’t my problem. My problem was that 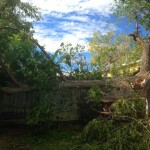 the tree on the east side of Mom’s yard was the one we used to climb as kids. Not all of us climbed it, but I spent countless hours up in that tree, as did some of my sisters. My kids and the children of my sisters climbed that old tree too.

For me that tree holds so many memories. We always pretended that it was a tree house, even though it never had a floor or anything like that. I suppose it was a bit like the movie, “Anne Of Green Gables” when she decided to climb up and sleep in a cherry tree. She didn’t do it, but rather had imagined to do it. Anne was a very imaginative child, and in some ways I see myself as being a lot like her. Up there in that old Chinese Elm tree, I spent countless hours just thinking…imagining. I loved it up there, because it was cool there in the shade and you could feel a bit like a bird, up there off of the ground that held most average people down. I felt free…not that I wasn’t 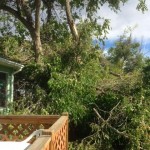 free, but this was a different kind of freedom that only a person, who has climbed up to sit in a tree high above the ground, will ever understand.

So many memories lived up in that old tree, and now the branches we sat in are gone. Yes, the memories will always be there, but no new ones can be created on those branches that have fallen, and that makes me very sad. I haven’t thought about climbing that old tree for many years now, and most likely would never attempt it, but just knowing that those old branches were there, was comforting somehow. And now that feeling is lost, and that…is very sad.