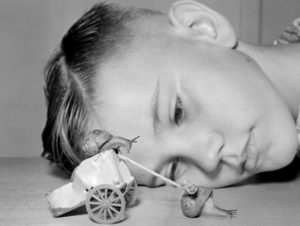 When I think of forms of entertainment, snail racing is about the furthest thing from my mind, but apparently it is a thing. In fact, on October 1, 1954 a ten year old boy named Martin Witter put his snail team through their rounds at a trial race at his home in Lynwood, California. Martin had formed, what he claimed to be, the only snail stable in the country. Every afternoon the snails were awakened for their trial runs by being placed in the sun. As the sunshine began to penetrate their shells, the snails came to life. On top of the racing snail’s shell, Martin had glued a tiny yoke made from a matchstick. The reins, made of string, were connected to a small simulated Roman chariot constructed from a fish food tin in which the snail driver sits. Speedy, in the harness and Butch, in the “Chariot” beat a neighborhood entry establishing a new track record of 3 feet in 5 minutes…not bad for a couple of racers, who we all know travel at a snail’s pace.

The “World Snail Racing Championships” is an annual event that started in Congham, Norfolk in the 1960s after 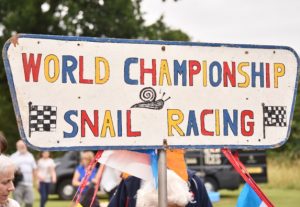 its founder Tom Elwes saw the same event in France. At the 1995 race the snails set the benchmark time of two minutes by a snail named Archie. The 2008 event had to be cancelled because the course was waterlogged by a period of heavy rain. That was also just days after the death of its founder, Tom Elwes. The 2008 World Championships was won by Heikki Kovalainen and a snail named after a Formula One racing driver, in a time of three minutes, two seconds. The 2010 World Championship was won by a snail called Sidney in a time of three minutes and 41 seconds.

The first official live snail competitive race in London, the “Guinness Gastropod Championship” was held in 1999. It was called by horse racing commentator, John McCririck who started the race with the words “Ready, Steady, Slow”. This is the common terminology for the start of a race. The following year Guinness featured a snail race in their advertisement, Bet on Black as part of their “Good things come to those who wait” campaign. It kind of funny when you think about it. Waiting for the end of a snail race would definitely be a wait. 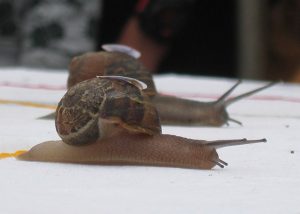 The advertisement won the silver award at the Cannes Lions International Advertising Festival and was self-parodied for their “Extra Cold” campaign several years later.

The “Grand Championship Snail Race” began in Cambridgeshire in 1992 in the village of Snailwell as part of its annual summer holiday. The event regularly attracts up to 400 people to the village, more than doubling its normal population. The rules are that you’re not allowed to touch your snail during the race, change snails or doing something that would make your snail go faster than it should. The snail has to win the race on its own.