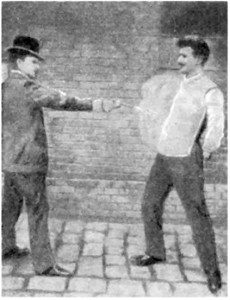 Every new invention has to have its trial run, but some of them might not be so easy to test as others. If you are testing a Frisbee to see if it flies, it is much different than testing a plane to see if it flies. Still, an invention cannot be used, sold, and especially patented without being tested, so testing must be done, and sometimes that can be a little bit dangerous.

For many years, police work was extremely dangerous…even more so than it is now. Without some of the protective coverings the officers have today, they could be easily killed in the line of duty…not that they can’t now, but there is a little bit less chance of it these days. Kazimierz Zeglen, was a Polish engineer, born in 1869 near Ternopol. He is credited with inventing the first bulletproof vest. In 1893, after the assassination of Carter Harrison Sr, the mayor of Chicago, he invented the first commercial bulletproof vest. In 1897, he improved it together with Jan Szczepanik who was the inventor of the first commercial bulletproof armor in 1901. It saved the life of Alfonso XIII, the King of Spain…his carriage was covered with Szczepanik’s bulletproof armor when a bomb exploded near it.

When the time came to test the bullet proof vest, a man names Mr Borzykowski, who was a friend of Szczepanik, agreed to test the vest…not on himself, mind you, but on his servant. When he shot his servant, it looks to me like the man braced for death, but he stood in place as he was told to do. It’s kind of like testing a shark suit for the first time. You would have no idea if you would see tomorrow or not. Once the vest was tested, however, it quickly became a valued piece of protective gear for police officers everywhere. The vest worked very well, but the early vests were quite heavy. Through the years, vests have much improved, and will continue to do so, as new materials become available.

When a new lighter vest was demonstrated by the Protective Garment Corporation of New York in 1923, it had to be proven again, because no one was willing to buy these vests sight unseen, so to speak. The gun players were WH Murphy and his assistant. Pictures were taken during a demonstration of the company’s bulletproof vest for DC area police. The live demonstration took place at the Washington city police headquarters. The inventors and salesmen were trying to convince the police force that these bulletproof vests did work and did save lives. The police officers in the background were all part of the Frederick County Police Department, the gun they were firing is believed to be a Smith and Wesson Model 10 Revolver. Mr 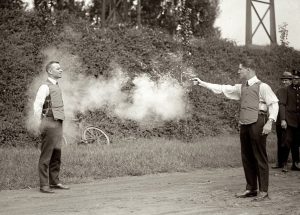 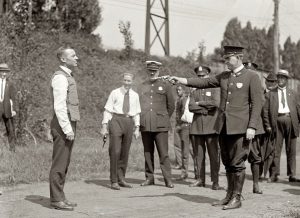 Murphy stood less than ten feet from the firing gun and took two consecutive .38 round slugs straight to the chest. An eye witnesses claims he “didn’t bat an eye” in both cases. Later Murphy gave the deflected .38 bullet to the police officer as a souvenir. This vest weighed 11 pounds, fit close to the body, and was considered more comfortable than the previous types of bulletproof vests. The bullet proof vest has become standard gear for police officers.