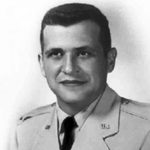 On May 1, 1960, CIA U-2 spy plane pilot, Gary Powers found himself in a lot of trouble. His plane was disabled after being hit by Soviet surface-to-air missiles. Powers had to let his plane fall from 70,000 feet to 30,000 feet before he could release himself and bail out of the damaged cockpit. It was 1960…and the Cold War was heating up. Powers was captured, and would remain a prisoner of war until a prisoner exchange on February 10, 1962. The United States now needed a plane that was safer for these men to fly. Something that went higher and faster than any other plane, and had a minimal radar cross section. It was imperative to have such an innovative aircraft so the United States could improve intelligence gathering. Enter Lockheed’s advanced development group, the Skunk Works® in Burbank. This team had already begun work on such an aircraft.

President Dwight D Eisenhower was very impressed with the U-2’s airborne reconnaissance during these tense Cold War times, but with the need for better protection for the pilots, Eisenhower’s request went out to Lockheed to build the impossible…an aircraft that can’t be shot down…and do it fast. American aerospace engineer Clarence “Kelly” Johnson was one of the preeminent aircraft designers of the twentieth century. He and his Skunk Works team had a track record of delivering impossible technologies on incredibly short, strategically critical deadlines. Still, everything for this project had to be invented. The group was known for its unfailing sense of duty, its creativity in the face of a technological challenge and its undaunted perseverance. Be that as it may, this new aircraft was in a different category from anything that had come before. This would be the toughest assignment Skunk Works had ever been assigned…at least up to that date. They needed to have the previously unheard of type of aircraft flying in a mere twenty months.

The Lockheed SR-71 “Blackbird” was that long-range, Mach 3+ strategic reconnaissance aircraft, and was operated by the United States Air Force. It was developed as a top secret black project by the Lockheed company. During aerial reconnaissance missions, the SR-71 operated at high speeds and altitudes to allow it to outrace threats. If a surface-to-air missile launch was detected, the standard evasive action was simply to accelerate and outfly the missile. The SR-71 was designed with a reduced radar cross-section, making it harder to spot. The SR-71 served with the U.S. Air Force from 1964 to 1998. A total of 32 aircraft were built. Twelve were lost 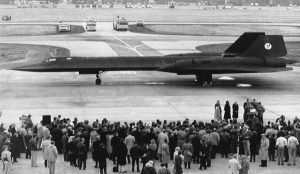 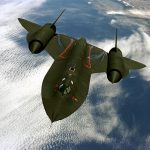 in accidents, but none of them to enemy action. The SR-71 has been given several nicknames, including Blackbird and Habu. It has held the world record for the fastest air-breathing manned aircraft since 1976. This record was previously held by the related Lockheed YF-12. On October 9, 1999, the Lockheed SR-71 took it’s final flight, and what a flight it was!! In it’s amazing final flight, the SR-71 Blackbird flew coast to coast in just one hour.