On April 10, 1912, Titanic set sail from Southampton. Titanic called at Cherbourg in France and Queenstown (now Cobh) in Ireland before heading west to New York. For the passengers and crew, Titanic was the ultimate in luxury, and to be on it was the ultimate thrill. The ship was the most luxurious ship of its day, and to add to their sense of excitement, it was unsinkable. The passengers were assured that the ship had so many fail-safes in place that the builders didn’t even think the lifeboats were necessary, and any that were considered to be in the way, were removed, in what would prove to be a fatal mistake. In the end, there were 20 lifeboats on board the ship, when she was supposed to have 64 lifeboats. Each had a capacity of 65 people. Most lifeboats were lowered to the water with less than half their actual capacity.

The night of April 14, 1912 was very cold, and the route Titanic was on was littered with icebergs. Other ships

in the area tried to warn Titanic, but the radio operator of Titanic did not take the warnings seriously. He was operating under the mistaken idea that Titanic could sail right through any ice field she might come upon, and have no problems whatsoever. The radio operator was wrong. Nevertheless, he shut of the radio after the 6th warning transmission. The iceberg strike came at 11:40 pm…but the first distress call was sent almost an hour later and even then the ships receiving the calls could did not believe it could be real. Finally, at 12:40 am, Carpathia’s radio operator gave the call to head for Titanic’s last known position.

Help would come too late for Titanic. By 2:20 am on April 15, 1912, Titanic sank, but she was not without her heroes. As the Titanic was sinking, the deck crew began loading passengers onto lifeboats. The engineering crew stayed at their posts to work the pumps, controlling flooding as much as possible. This action ensured the 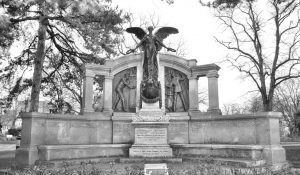 power stayed on during the evacuation and allowed the wireless radio system to keep sending distress calls. These men bravely kept at their work and helped save more than 700 people…even though it would cost them their own lives. When Titanic went down, she took with her 1500 people. of those, 688 were crew members, including all 25 of the engineers who worked tirelessly, at their own peril to buy what little bit of time they could for the passengers in their care. Many of the crew members forfeited their lives so that the passengers might live. Were serious mistakes made…yes, of course, but by the same token, the sinking of Titanic saw some of the most amazing bravery ever.