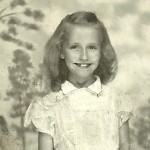 As my sisters and I were going through our parents things a couple of weeks ago, we came across our mom, Collene Byer Spencer’s diary. It was given to her by her sister Virginia and her husband in 1947, when Mom was just eleven years old. As we drew names for the different items we found, I received the diary. My sister, Allyn Hadlock had read a few passages from it, and thought it felt wrong somehow, but since Mom is no longer with us, I think it’s ok to read it. So tonight, I have been doing just that. The diary is a five year diary, and it was written in sporadically from 1947 to 1951. Funny thing about diaries…your well meaning plan to writing in them faithfully every day, always seems to dwindle into once in a great while pretty quickly. Having had a diary myself…wow, I wonder where that got to, and if we will come across it somewhere in all of Mom’s things. What things did I write in there that might be embarrassing? The rambling of a silly little girl…all but meaningless today. Well, all I can say is that I hope we don’t come across it.

That said, I do remember my own diary, and much like my mother’s it seems that at the age when a diary becomes so interesting, and all the rage, life always seems to take on a bit of the boring. I suppose that is because nobody’s life can be all bells and whistles every day. At some point, you always find yourself with very little to say about the day’s events. Life’s days aren’t often filled with daily exciting things that are worthy of filling the pages of a diary…at least not when you are eleven. I really wish I had maybe been a little more 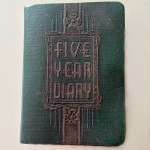 persistent about writing in my diary or a journal in later years though, because I now see the value of such writings.

I did learn some things about my mother, and even about my dad. Mom met dad when she was just ten years old. She told me that the first time she saw him she thought that he was the most handsome man she had ever seen. Dad was twelve years older than Mom, so when she met him, he would have been 22 years old, and at ten, Mom was just about getting to the age where boys were suddenly interesting, and an older man who was as handsome as my Dad was…well, it must have felt like meeting a movie star. Dad liked Mom right away, but probably not is a romantic way. He was a friend of the family, and so came to visit often. During the next few years it appeared to me that Mom had a bit of a crush on Dad, but maybe tried not to let everyone know that, because of the inevitable teasing that would go along with it. By 1949, Dad’s opinion started to mean more to Mom, and when she cut her hair to look more grown up and he didn’t like it…because Dad has always loved long hair, she was upset, and said, “I got my hair cut, and I like it. Al was mad at me, but he doesn’t have a lease on me, so how I wear my hair is none of his biz!” For his part, Dad told her he was going to grow a beard, and he did. She pretended not to notice. In her early years and even while Dad was coming around a lot, Mom was a bit of a boy crazy girl. I always wondered where I got that from, and now I know. I had a boyfriend from the moment I started school, and it appears that Mom did too, quite a lot.

By the time Mom was fifteen years old in 1951, Dad was already sure that she was the girl he wanted to spend the rest of his life with. Their romance reminded me a little bit of Laura Ingalls in the Little House on the Prairie books. Almanzo knew he wanted to marry Laura, and she did too, but her dad said they had to wait to marry until she was eighteen. In Mom’s case, it wasn’t her dad who thought they should wait until she was eighteen, but her. At fifteen years of age, she had to get to know herself first. In the end, they would only wait until she was seventeen, but it did not matter. Theirs was a match made in Heaven, and a love to last a lifetime. And the ramblings of a girl writing in her diary trying to figure out just how life and love worked while written sporadically, were clear to this reader anyway.