The Killer Came To Kill, The Victim Came To Die 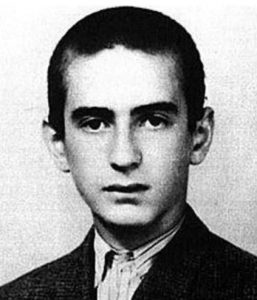 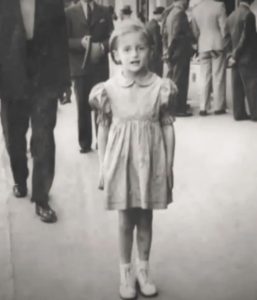 When we look at the events of the Holocaust, we find ourselves looking through the eyes of those who were resigned to their fate. Some even felt like this was what they were born for and nothing could possibly change that. One Holocaust survivor, Eliezer “Elie” Wiesel, who was born in Sighet, Romania, on September 30, 1928 expressed that very sentiment concerning his time as a prisoner of the Nazi Regime. Wiesel’s early life was fairly normal, as it was a fairly peaceful time for the Jewish people. He was part of an average Jewish family consisting of his mother, father, and three sisters, but all that came to a screeching halt in 1944, when they were shipped off to the Auschwitz concentration camp in Poland. The Holocaust experience was so horrific and such an assault on both his body and mind, that it defined his life. He couldn’t even stand to talk about much of it for over 60 years.

Wiesel, when he could finally speak of the atrocious acts he and others were subjected to, told of how the Nazi Regime conditioned the prisoners in the camps to believe that their future was what it was, and that they had no say in it. When his own father was beaten in front of him, Wiesel just stood there. He was horrified, but he didn’t move…he didn’t dare. For years that life moment haunted him. His father told him that it wasn’t so bad, but as his father’s son, Wiesel knew he should have done something. Nevertheless, he like so many other Jewish prisoners of the Nazi Regime, was made to understand that the killer (Nazis) came to kill, and the victim (Jews) came to be killed…like it was their destiny from the beginning of time. Somehow they were taught that this was the reason they were born. They are expected to believe that that their life had no other purpose, and that their voice didn’t matter…that their lives didn’t matter.

Wiesel’s ordeal really began in 1940, at age 12, when Hungary, which was in alliance with Nazi Germany, annexed his hometown of Sighet, Romania…although he didn’t know it then. At first things seemed ok, but then all the Jews in the city were forced into a ghetto. This was the story so many Jews shared. By 1944, when Elie was 15, Hungary colluded with Germany to deport all residents of the ghetto to the Auschwitz-Birkenau concentration camp, in Poland. They were trucked out of their homes, their possessions stolen, and then they were packed into a cattle car on a train. It was so tight that they had to stand up the whole trip. They had no food or water, and no restroom facilities. It was terribly degrading. Upon arrival at Auschwitz, Elie’s mother, Sarah, and youngest sister, Tzipora, were killed, and he and his father, Shlomo, were separated from his other sisters, Hilda and Beatrice. Elie and Shlomo were transferred to Buchenwald concentration camp, where his father died.

Then came some of the worst scenes he can remember. Wiesel describes it this way: “Not far from us, flames, huge flames, were rising from a ditch. Something was being burned there. A truck drew close and unloaded its hold: small children. Babies! Yes, I did see this, with my own eyes…children thrown into the flames. (Is it any wonder that ever since then, sleep tends to elude me?)” Wiesel battled with immense guilt and the ugliness of humanity for most of his life after surviving the Holocaust. Nevertheless, Wiesel was devoted to combating indifference, intolerance, and injustice. He became an accomplished writer, professor, and overall champion for human rights. Finally on April 16, 1945, American military personnel liberated the Buchenwald concentration camp. The survivors were barely alive, and even solid food ran the risk of causing their death, because their digestive systems were not prepared for much food, even though they were starving. The soldiers didn’t know the consequences, and gave them chocolate bars. The results were disastrous. They finally had to stop giving them anything, which was just as hard, if not harder than the problems caused by feeding them.

Thinking his family was gone, Wiesel eventually made his way to Paris, where he enrolled in the Sorbonne to study literature, philosophy, and psychology. By age 19, he was working as a journalist for a French newspaper, earing $16 per month…a pretty goo wage in those days. A few years later, in 1949, he was sent to Israel, to cover the early days of the new nation. Wiesel found out that two of his sisters survived, when his sister, Hilda saw his picture in a newspaper. While Elie was living in a French orphanage in 1947, a journalist took his photo, and it was published in the French newspaper where Hilda saw it. In an interview in 2000, Wiesel admitted he thought all his sisters had died in the Holocaust. “When I was still in Buchenwald, I studied the lists of survivors, and my sisters’ names were not there. That’s why I went to France…otherwise I would have gone back to my hometown of Sighet. In France, a clerk in an office at the orphanage told me that he had talked with my sister, who was looking for me. ‘That’s impossible!’ I told him. ‘How would she even know I am in France?’ But he insisted that she’d told him that she would be waiting for me in Paris the next day. I didn’t sleep that night. The next day, I went to Paris, and there was my older sister! After our liberation, she had 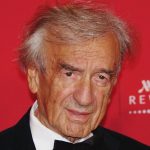 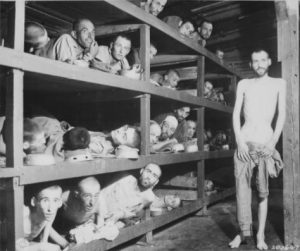 gotten engaged and gone to France, because she thought I was dead too. Then one day she opened the paper and saw my picture [a journalist had come to the orphanage to take pictures and write a story]. If it hadn’t been for that, it may have been years before we met. My other sister had gone back to our hometown after our release, thinking that I might be there.” The following year, Elie reunited with Beatrice, in Antwerp, Belgium. She eventually emigrated to Canada, where she lived for the rest of her life. Elie Wiesel passed away on July 2, 2016.