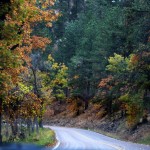 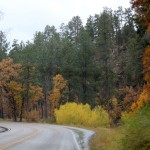 Last Sunday, while on a trip to Hot Springs, South Dakota to hike the Mickelson Trail, Bob and I found ourselves sidelined due to rain. We sat around the hotel for several hours…until Bob decided that he had cabin fever. So we decided to go for a drive. I had driven this road on my trip to Wisconsin with my mom and sister, Cheryl. The road took us out the east side of Hot Springs, and then toward Rapid City. We went a ways and then turned toward Custer. The drive was beautiful with all the fall colors. It would eventually connect us with Custer State Park, but since we weren’t going to the Needles or the Wildlife Loop, we didn’t have to pay the fee.

As I said, the drive was nice, even in the rain and the scenery was beautiful, but one thing we started to notice…over and over, was a lot of turkeys. It felt like we had stumbled upon Turkey Central. They were in the farmers fields, by the side of the road, and even walking down the road. And they weren’t one bit afraid of our car either. In fact, they completely ignored us and our car. They moved only when they wanted to move. It occurs to me that these turkeys are quite used to all this traffic, and they might even like it. It also occurs to me that these turkeys are most likely bound for Thanksgiving and Christmas tables in the area. As we drove, we slowly went beyond all the turkeys, but it was too late by then, because I had already decided that we had just traveled through Turkey Central. It was as if they owned that stretch of road…or at least thought they did. 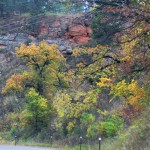 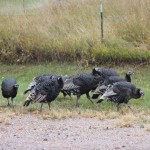 The rest of our drive was fairly void of wildlife, and I went back to looking at the beautiful colors. My only wish would be that our area might have a few more red fall colors than it currently has…and that there might be a few more of the various kinds of wildlife. We did happen to see a few buffalo, but they were on someone’s ranch, so I suppose they aren’t wild…not that I intend to find out. For me, the turkeys were really the highlight of the drive. They just acted so bold and brave…never even taking notice of us at all. I think it was a very interesting drive through Turkey Central, indeed.