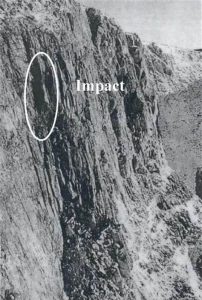 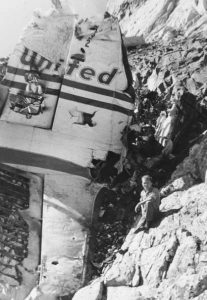 Wyoming doesn’t have as many plane crashes as other states…at least not to my knowledge. It’s probably because of the fact that with a smaller population, there are fewer flights in and out…at least in the past. That may have changed in more recent years. Nevertheless, on October 6, 1966, a DC-4…United Airlines Flight 409, with 66 people on board, flew into the side of a cliff on Medicine Bow Peak in the Snowy Mountain Range near Laramie, Wyoming. At that time, it was the worst air disaster in United States history.

Lost in the disaster were three crew members, two infants, several military personnel, and five female members of the Mormon Tabernacle Choir. Their four-engine propeller plane took off from the now-closed Stapleton International Airport in Denver that morning. Its destination was Salt Lake City, Utah. Jet airliners didn’t exist then, and propeller-driven airplanes necessarily flew at much lower altitudes. Things like not being able to pressurize the cabin, necessitated a lower flight level. Unfortunately, it also made air travel quite a bit more hazardous. Things like terrain collisions and weather issues were more common. Weather forecasts weren’t as sophisticated and the widely dispersed technology we have today was still a dream in some scientists mind.

The normal flight path of the Denver to Salt Lake route in those days, was north of Laramie around the high points of the Snowy Mountain Range. It seems to be a long way around to us these days, but it was necessary back then. Still, pilots would occasionally fly over the range to save time. In retrospect, I’m sure many would regret that practice after hearing about United Airlines Flight 409, and the horrible outcome of that shortcut.

The night of October 5th brought high winds and snow…both normal for Wyoming this time of year. The conditions over the mountains were most likely less than ideal as UA409 crossed the range the next morning. At 7:26am on October 6th, the plane flew into the side of the mountain…at full speed. There were no “black boxes” at that, so the only way to determine the time was that the onboard clocks that were recovered after the crash were frozen at the moment of impact. According to the investigation report, the plane exploded on impact, littering the mountain with debris over a mile-long path. Two huge black marks marred the mountain, as oil from the engines splattered across the surrounding terrain. The impact site was just 25 feet below the crest of the mountain, at 12,000 feet…25 feet from clearing the top. That is so shocking…that I find it difficult to wrap my mind around that fact. If they could have made it just a little over 25 feet higher, they just might have made it.

After the impact, the tail section separated from the rest of the aircraft, fell down the cliff, and rested on a ledge halfway down. A search for the plane ensued, and an F-80 fighter jet based out of Cheyenne spotted the wreck a little more than four hours after the crash. The pilots of the jet told of bad weather in the area. With the location, rescuers headed to the area, but with the windy weather caused, it took several attempts to locate the wreckage. It took them until Thursday afternoon to actually reach the crash site. Then began the gruesome task of recovering the dead. Bodies were lowered by rope and pully down the cliff. Some bags were marked “spare parts.” All the dead were identified, and their remains carried out on horseback.

To this day, the cause of the crash is uncertain. The pilot was very skilled, and the shortcut over the mountain would not have saved a lot of time. It is unknown why he took the shortcut, or why he flew at such a low 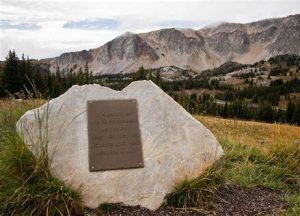 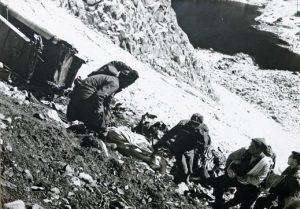 altitude. The wreckage remains at the site to this day, as often happened back then. A hiker made a YouTube video of his trip there, where he found pieces of scrap metal, wires, and rusted engine parts from the plane. He also found a shoe that appears to be from that era. I imagine the finds left the hiker with a feeling of being in an almost hallowed ground…almost like a grave site.