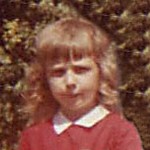 I was a little girl, when the original Kmart in Casper was built. We lived less than a block from the site, and very much enjoyed watching the construction as it progressed. It was very exciting for my sisters and me…at least the ones who were old enough to be able to play outside. Little did I know then, that the construction site was going to be a bit of a problem for me. It had been raining for a couple of days, but I still wanted to go over that weekend and see what had been accomplished. It so happened that I had just gotten a pair of penny loafers, a shoe which was very popular at that time, and one that I had wanted very badly. I was just a kid, and I never gave thought to the rain in relation to a construction site that we girls had been accessing through the alley at the end of the street. Since they had been doing a lot of digging, there were piles of dirt next to that alley…add rain to that dirt and…yes, you get mud.

A kid doesn’t think of boots…especially in the summer time. I simply waded through all that mud in my new penny loafers….and it was probably knee deep. As much as I dislike mud and dirt these days, I really have to wonder why that mud didn’t bother me. I guess I was on a quest to discover how the construction was going. Needless to say, I went bravely on my quest through the mud to see the new Kmart building. In my recollection, the building was coming along just fine, but my muddy legs were getting uncomfortable, so I headed 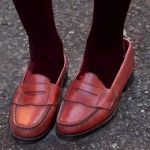 home…yes, back through the mud.

My mom was not particularly happy with me when I got home that day, and the day that followed was not better, but rather worse. After cleaning me up, she did the best she could with my new shoes, and while they looked pretty good, the next day would bring a problem that I will never forget as long as I live. My super cool, brand new, beautiful Penny Loafers had shrunk, and they no longer fit me. They were made of leather, and I had no idea that they would shrink. I was devastated to say the very least. I assume that my sister, Caryl had a super cool, brand new but slightly used, beautiful pair of Penny Loafers after that.