shepherd of the valley care center 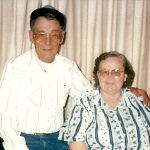 My mother-in-law, Joann Schulenberg lived a long life. The last five years were spent in Shepherd of the Valley Care Center with Alzheimer’s Disease. Her time at Shepherd was far from sad and miserable, as many people would have expected. Mom lived in her own little world, as Alzheimer’s patients do toward the end of the disease, and I’m here to tell you that her world was quite interesting. Her stories and her life in the past were very vivid in her mind, and she would happily tell those who would listen, all about it. I was one of the privileged few who got to hear all or most of her stories.

Mom did live an interesting life for sure. From her early childhood living in a sheep wagon in Montana, while her dad, Robert Knox tended the sheep; to her married years in Wyoming, raising her six children, Marlyce Schulenberg (who passed away in 1989), Debbie Cook, Bob Schulenberg, Jennifer Parmely, Brenda Schulenberg, and Ron Schulenberg; there was never a dull moment. She kept busy knitting, crocheting, sewing, canning, or in her later years, thinking she was still doing these things. There were certain things that she always thought were very cool in her life. Birthdays were always an important thing, and she loved the fact that she shared her with her first great grandson, Chris Petersen. Just like her mother before her got to share her birthday with her great granddaughter, Corrie Petersen, who is Chris’ mom. Those things were considered a “big deal” to her.

While she was at the nursing home, my mother-in-law was really quite the comedian. She would tell us things like she made the dinner, and that she did the laundry and the dishes. She was completely convinced that these things were true. Of course, no one argued the point with her either. What good would that have done? Her Alzheimer’s convinced her that she was right, and that was ok. She felt useful, and that was all she ever wanted. My mother-in-law always loved doing things for people. Her sweaters and afghans were stunning and 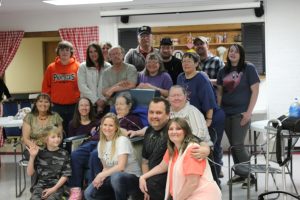 meticulous. She spent so many years knitting and crocheting, that I’m sure she could do both in her sleep. I think if she made a mistake, she would know it for sure. She could probably locate the mistake and fix it without waking up. She just knew every stitch that well. It makes me sad that her hands are stilled now, but I know that she is in a better place, and she has her full memory now too. Today would have been my mother-in-law’s 90th birthday. Happy birthday in Heaven, Mom. We love and miss you very much.