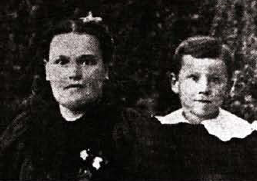 We seldom think of the “man of the family” being 6 years old, but sometimes circumstances put families in tough situations. Harland Sanders was born September 9, 1890, in Henryville, Indiana to Wilbur David and Margaret Ann (née Dunlevy) Sanders. He was the oldest of their three children, having a younger brother and sister. Sanders’ dad was a gentle and loving man who worked his 80-acre farm, until he broke his leg in a fall. He then worked as a butcher in Henryville for two years. Sanders’ mother was a devout Christian and strict parent, who did her very best to teach her children right from wrong.

At the tender age of just 6 years, Sanders was forced to take over as man of the family when his father passed away. Often when that happens, the new “position” is just symbolic, but in this case, it certainly wasn’t. Because his mother had to get a job, and Sanders needed to help provide for his younger siblings, so he took jobs as a farmer, salesman, streetcar conductor, and railroad fireman from a young age. His mother got work in a tomato cannery, and the young Sanders was left to look after and cook for his siblings. By the age of seven, he was reportedly skilled with bread and vegetables, and improving with meat. 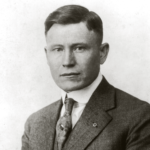 Times were hard, and the children reportedly foraged for food while their mother was away at work for days at a time. Strange, I know, but remember that things were different in the late 1800s. His formal schooling ended after the seventh grade.

His personal life took a hit, because of the stresses and pressure he always seemed to be under. His first wife, wife Josephine King, with whom he had three children: Margaret Josephine, Harland David Jr, and Mildred Marie, left him in 1947, and in 1949, he married his mistress Claudia Ledington-Price…cheating being his biggest failing, in my mind, but things happen. In September 1970 he and his wife were baptized in the Jordan River. He also befriended Billy Graham and Jerry Falwell.

After his son died at the age of 20, Sanders dealt with severe depression. Through this depression, though, he finally found a business he could succeed at: restaurants. At age 40, Sanders was running a service station in Kentucky, where he would also feed hungry travelers. Sanders eventually moved his operation to a restaurant 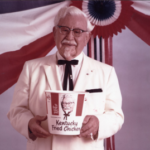 across the street and featured a fried chicken so notable that he was named a Kentucky colonel in 1935 by Governor Ruby Laffoon. Sanders had to essentially restart the business after roadways had diverted traffic from passing by his restaurant. Nonetheless, his restaurant was eventually rebuilt and his chicken, with its famous new cooking methods, were celebrated. After selling KFC, Sanders would go on to disagree with the direction of the company that still used his face as its advertising, and he even went on to sue his former company. He continued to work for the company until his final days and was reportedly never seen in public without his white suit. Sanders was diagnosed with acute leukemia in June 1980. He died at Louisville Jewish Hospital of pneumonia on December 16, 1980, at the age of 90.