The Making Of A Soldier 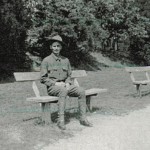 Since my oldest grandson, Chris Petersen turned eighteen last February 28th, and had to register for the draft, and my grandson, Caalab Royce will be registering in June after he turns eighteen this year on the 25th, I have wondered a little more about the making of a soldier…in any war. Since the draft is something that almost never happens these days, it was not a real priority in my mind, however. Then I started looking at my Aunt Bertha Hallgren’s journal again, because she was such a great writer, and because I haven’t referred to her work in a while. I stumbled across a reference she makes to the experience of a World War I soldier. Since my grandfather, George Byer fought in World War I, that part of her journal made me curious.

The story Aunt Bertha wrote was funny to a large degree, although I doubt that the soldier she wrote abut thought it was funny exactly. I suppose that as a eighteen year old boy, at a time when education was not always the top priority, he did not always understand the new to him words that were being thrown at him, being asked if you were an alien, might make you wonder if they were asking if you were sick right now, but the humor was somehow lost on the officer who was asking the questions. And when he asks you your name, and he has known you all your life, because he’s your milkman, it might be hard not to say, “You know my name.” Nevertheless, you must quickly learn that knowing you in life and knowing you in the military are obviously two very different things. You had better just answer the question and not act like a smart-aleck.

After getting past the registration area, and getting the feeling that these guys didn’t expect you to make it past the first week in combat, you might start looking for the door, and wondering if there was any way to make them believe you were only seventeen after all. Nevertheless, the line moved forward, and there was no way to get out of it, so you followed along. At some point you were issued a uniform, which the soldier Bertha was talking about described as one of two sizes…too small or too big. He pointed out that the pants were so tight that he didn’t dare sit down, and the shoes were so big that he could “turn around twice, and they didn’t move”. Sadly, I think that is the way it was during World War I. A guy could probably deal with the loose fitting clothes, but those tight ones wouldn’t last long. And to make matters worse for our particular soldier, he passed an officer, who immediately asked him if he had noticed the uniform the officer was wearing. In his typical eighteen year old mouthiness, and his lack of understanding the meaning of the question, our new soldier, asked why the officer was complaining. Hadn’t he seen how ill fitting the soldiers uniform was after all. I seriously doubt if the officer saw the humor in that.

After another mouthy session, the soldier found himself digging a hole…then being told to dig another one to throw the dirt into. I guess you can see where this task was heading. If our soldier didn’t figure out pretty fast 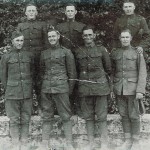 that he needed to keep his sarcasm to himself, then it is my guess that he spent a lot of time peeling potatoes, scrubbing floors, and digging holes…when he wasn’t fighting for his life that is. As time went on, I’m sure he figured out that they didn’t care about his opinion, and if he gave it anyway, he was going to wish he hadn’t. While this type of soldier would not really make a great soldier, he would probably have made a funny movie. I’m sure he got over the need to be funny once the bullets started flying too. By the way, I really don’t recommend that any of the soldiers, who might be coming up the ranks, act this way. I think that while sarcasm in school might make you the class clown, and make you popular with your friends, because that’s what kids do, it will not have the same affect on your commanding officer in any way, shape, or form.