A Haven For The Birds 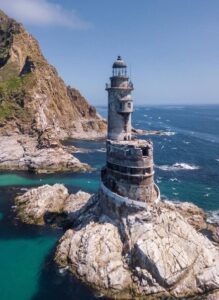 I like lighthouses. That is just a fact. I am particularly fascinated with unusual lighthouse. There are many lighthouses all over the world. They are, of course, used to direct ships away from shallow waters or dangerous rocks that lurk below the surface of the water. Today, there are more than 21,600 lighthouses worldwide, and there are a few that are still in use. In pre-GPS days, they played a vital role in the shipping industry, but these days they are usually used as tourist attractions. Many are privately owned, and are only used in an extreme emergency, when the electronic guidance systems are down. Some lighthouses are simply abandoned. I have mixed feelings about those, because when abandoned, they usually fall into disrepair, but there is something about abandoned buildings that has always intrigued me…even when they have fallen into disrepair.

One such unusual, abandoned lighthouse is the Aniva Lighthouse in Sakhalin, Russia. The lighthouse is situated on a small rock called Sivuchya near the rocky Cape Aniva. It is difficult to reach, and can only be accessed by water. To make matters worse, the tides are strong there. Still, the breathtaking scenery makes the journey worth while. Construction started on Aniva Lighthouse in June 1937 and finished in October 1939, taking just over two years. Building this navigational structure was difficult: all of the construction materials had to be delivered by water. Severe weather conditions didn’t make the process any easier.

When I first saw a picture on the Aniva Lighthouse, it reminded me of the front of a ship. It almost looked like a 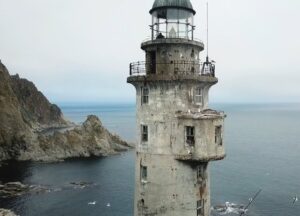 shipwreck, except for the lighthouse part, of course. Upon closer inspection, the lighthouse really doesn’t look like a ship at all, but maybe it was designed to give that illusion. The concrete tower, is painted to match the surrounding rocks, its stroboscopic lamp located 131 above the ground. The structure is round in shape and equipped with a bay window, the 9-floor tower stands on an oval base, which looks like it is coming out of the coastal rocks. Maybe that’s why it looks like a ship.

The Aniva Lighthouse was well equipped for living, no matter what the weather conditions. The basement was equipped with diesel engines and batteries. The kitchen was located on the ground floor along with the food storage The radio room, equipment room, and watch room were situated on the second floor of the lighthouse. As many as 12 people could be accommodated in the living quarters, located on the third, fourth and fifth floors, with each floor having a separate room. The interior of the quarters was modest, housing two bunk beds and small alcoves for personal belongings. Much of the light came in through small porthole windows. The storeroom was on the sixth floor. The seventh floor housed the mechanisms of a pneumatic siren, with its horn installed directly on the roof of the bay window. The eighth floor was used for fuel storage. The ninth floor housed the lens rotation mechanism of the lighthouse. The lantern rotated inside a bowl with about 660 pounds of mercury. The stroboscopic lamp was set in motion by a mechanism similar to a clockwork. Running through 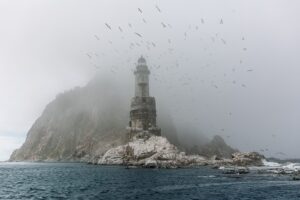 the center of a spiral staircase leading to the very top of the tower, was a pipe with a suspended weight of 595 pounds inside. It took the weight three hours to reach the bottom, rotating the lamp in the process. After that, the lighthouse keeper had to rewind the system. The lighthouse had a range of 17.5 miles. That must have been a job.

It was decided to make the Aniva Lighthouse autonomous by re-equipping it to work from a nuclear power source in the 1990s. In 2006, the radioisotope generators were removed. The lighthouse has been abandoned ever since. These days it is a haven for the birds.