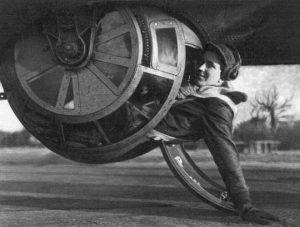 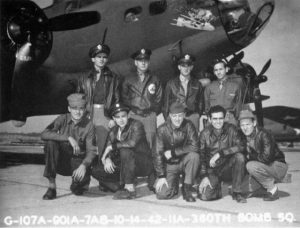 Every war has its casualties…it is an inevitable part of battle. World War II was no different, and in fact it was the deadliest war in world history, with casualties between 40,000,000 and 72,000,000. On average, 6,600 American servicemen died per month during World War II, about 220 a day. By the end of the war, over 40,000 airmen were killed in combat theatres and another 18,000 wounded. Some 12,000 missing men were declared dead, including a number liberated by the Soviets but never returned. More than 41,000 were captured, half of the 5,400 held by the Japanese died in captivity, compared with one tenth in German hands. As with any part of the war, being an airman in World War II was simply a very dangerous business.

Over the years of World War II, there were many stories of men falling from their planes either from attack or accident. I’m sure some were just stories, but this is a true story. Staff Sergeant Alan Magee was born on January 13, 1919 in Plainfield, New Jersey, the youngest of six children of Resue and Doretta (Winn) Magee. Alan grew to be a short 5’7″ tall. That is short for a man, but slightly tall for a ball turret gunner on a B-17 bomber. Like many men, Alan joined the service right after the attack on Pearl Harbor. He was assigned as a ball turret gunner with the 303rd Bomb Group, 360th Squadron stationed at RAF Molesworth, which is a Royal Air Force station located near Molesworth, Cambridgeshire, England.

At 5’7″ inches, Magee was barely small enough to fit in the B-17’s ball turret. The ball turret was a cramped, donut shaped plastic glass and metal turret on the belly of the bomber. It was such a tight fit that a gunner’s knees were practically against his chest. Magee had to leave his parachute on the deck of the four engine Flying Fortress. That fact would prove to be detrimental. On January 3, 1943, Magee was assigned to a B-17, nicknamed “Snap! Crackle! Pop!” They were on a bombing run during the daytime over Saint Nazaire, France, also known at “Flack City,” when German fighters shot off a part of the right wing, causing the plane to enter a deadly spin. This was Magee’s seventh mission. That was an amazing feat in and of itself, because the life expectancy of a ball turret gunner in World War II was 12 minutes. It was really considered a suicide position on the plane. Oddly too, Magee was one of the oldest members of the 10 man crew at 24 years. The pilot, Captain Arthur Adams, was only 19, and this was only his third combat mission.

Magee was wounded in the attack, but managed to escape the ball turret, scrambling back into the cabin for his parachute. The only problem was that his parachute had been damaged and was totally useless, so having no other choice, Magee leapt from the spiraling plane without his parachute, losing consciousness rapidly because of the altitude. During his fall from the plane, Magee asked God to save his life. “I don’t wish to die because I know nothing of life,” was his appeal to God. Then, he totally lost consciousness and crashed through the glass roof of the Saint Nazaire train station. Eyewitnesses watched in horror as Magee came through the skylight. When he regained consciousness, Magee said to his captors: “Thank God I’m alive.” Magee’s injuries included 28 shrapnel wounds. A lung and kidney were hit. His nose and an eye were ripped open. His broken bones included his right leg and ankle. A right arm was nearly severed. The Germans decided that anyone who could miraculously survive such a fall deserved “real special attention.” It is thought that he fell over four miles before crashing through the glass roof. Some said they thought that the glass roof lessened Magee’s impact, and rescuers found him still alive on the floor of the station. It is my belief that God sent His angels to break the fall, because a 20,000 foot into a soft field can be fatal, so it is a miracle that he fell through a glass roof onto a concrete floor and lived. Magee regained consciousness in the first aid station before being transferred to the local hospital. “I owe the German military doctor who treated me a debt of gratitude,” said Magee. “He told me, ‘We are enemies, but I am first a doctor and I will do my best to save your arm.’” The doctor saved Magee’s arm and tended his other injuries, but unfortunately, Magee never found out the doctor’s name, so he couldn’t thank him. Staff Sargent Magee was taken as a POW and given continued medical treatment for his injuries by his captors. Magee was rescued in May 1945, and received the Air Medal for meritorious conduct and the Purple Heart. When the war was over, Magee got his pilot’s license and enjoyed flying. He worked a variety of jobs in the airline industry, and retired in 1979. He then moved to Northern New Mexico. 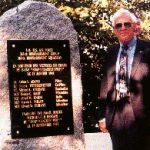 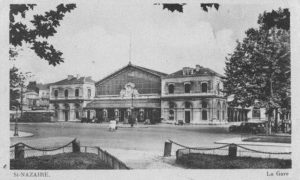 The people of Saint Nazaire, France honored Magee and the crew of his bomber on January 3rd, 1993 by erecting a six foot tall memorial to them. Alan Magee passed away in San Angelo, Texas on December 20th, 2003, at 84 from stroke and kidney failure. With the German doctors’ help, Magee fully recovered. Magee later hiked and backpacked and “led a pretty good life.” Two of his crewmen also survived. In all, 75 airmen died, seven U.S. planes were destroyed and 47 were damaged that day.