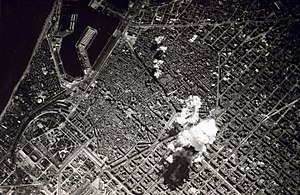 Sometimes, in researching weapons of war, and especially during World War II, I am shocked and horribly saddened by the ability of man to impose new and horrific means of death upon their enemies…simply because they disagree about how things should be run. During World War II, and possibly earlier, the killing method of Carpet bombing, also known as saturation bombing, came into practice. Carpet bombing is just what you would expect, “a large area bombardment done in a progressive manner to inflict damage in every part of a selected area of land.” Instantly, a picture of multiple explosions, the destruction of large areas of a town, or the entire town, come to mind. Mass casualties are expected. This is the way war is waged when hate reigns, but then most wars these days or even in the World War II era were filled with hate.

In the European Theatre, the first city to suffer heavily from aerial bombardment was Warsaw, on September 25, 1939. Achieving the results they wanted, the Germans continued this trend in warfare with the Rotterdam Blitz…an aerial bombardment of Rotterdam by 90 bombers of the German Air Force on May 14, 1940, during the German invasion of the Netherlands. The objective was to support the German assault on the city, break Dutch resistance, and force the Dutch to surrender. So in the middle of a ceasefire, they dropped the bombs anyway, destroying almost the entire historic city center, killing nearly nine hundred civilians and leaving 30,000 people homeless. That was still not enough for the Nazis. The Oberkommando der Luftwaffe (OKL) used the destructive success of the bombing to threaten to destroy the city of Utrecht, if the Dutch government did not surrender. The Dutch surrendered early the next morning.

With the actions of the Nazis, the British knew that they had to act. The Battle of Britain developed from a fight for air supremacy into the strategic and aerial bombing of London, Coventry and other British cities. The British built up the RAF Bomber Command in retaliation for the bombings, which was capable of delivering many thousands of tons of bombs onto a single target, in spite of heavy initial bomber casualties in 1940. The plan was to break German morale and obtain the surrender which Douhet had predicted 15 years earlier. Then the 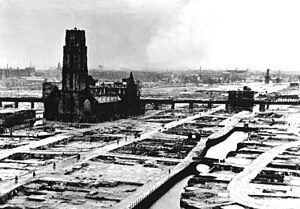 United States joined the war and the USAAF greatly reinforced the campaign, bringing in the Eighth Air Force into the European Theatre.

Still, that meant that the Allies would have to play the same game the Nazis had played. Many cities, both large and small, were virtually destroyed by Allied bombing. Cologne, Berlin, Hamburg and Dresden are among the most infamous, the latter two developing firestorms. I suppose the Germans finally found out what their own horrific tactics had done. Carpet bombing was also used as close air support (as “flying artillery”) for ground operations. The massive bombing was concentrated in a narrow and shallow area of the front (a few kilometers by a few hundred meters deep), closely coordinated with the advance of friendly troops. The first successful use of the technique was on May 6, 1943, at the end of the Tunisia Campaign. Carried out under Sir Arthur Tedder, it was hailed by the press as Tedder’s bomb-carpet (or Tedder’s carpet). The bombing was concentrated in a four by three-mile area, preparing the way for the First Army. This tactic was later used in many cases in the Normandy Campaign.

Carpet bombing was used extensively against Japanese civilian population centers, such as Tokyo, in the Pacific War. On the night of March, 9-10, 1945, 334 B-29 Superfortress heavy bombers were directed to attack the most heavily populated civilian sectors of Tokyo. Over 100,000 people burned to death in just one night from a heavy bombardment of incendiary bombs, comparable to the wartime number of US casualties in the entire Pacific theater. Another 100,000 to one million Japanese were left homeless. Similar attacks against Kobe, Osaka, and Nagoya, as well as other sectors of Tokyo followed, where over 9,373 tons of incendiary bombs were dropped on civilian and military targets. By the time of the dropping of the atomic bombs on Hiroshima and Nagasaki, light and medium bombers were being directed to bomb targets of convenience, because most urban areas had already been destroyed. In the 9-month long civilian bombing campaign, over 400,000

Carpet bombing of cities, towns, villages, or other areas containing a concentration of civilians is considered a war crime as of Article 51 of the 1977 Protocol I of the Geneva Conventions. Sometimes, that might make the nations think twice, but some nations, like the German Third Reich, think they can get away with anything. Hitler was crazy, and after deciding on the “Final Solution,” what is a little bit of Carpet Bombing in the mix. Carpet bombing was a horrible use of force, and in World War II and other wars since, it has taken many lives, and in the wrong hands it’s even worse.