The Little Town Of Denver 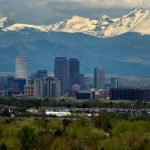 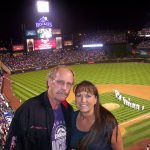 My husband, Bob and I love to go to Denver, Colorado periodically. We usually try to go to a Rockies game, shop some, and walk a lot. I think that most people who live in Wyoming, and elsewhere across the nation, have made the trip to Denver periodically. It is a shopping hub for this area, and on top of that, it is a huge cultural hub too. Denver is not a city I would want to live in, because I really don’t care to live in such a big city, but I do enjoy going there occasionally.

I do wonder how I would have felt about Denver in it’s early days. Back in 1858, Denver was just a small frontier town in the Colorado Territory. In those days, the town was not called Denver, in fact, I don’t know if it even had an official name. In a city where shopping brings in a huge amount of revenue, Denver, on this day October 29, 1858, saw its first store open. One month later, the town would take on the name Denver in a ploy to gain favor from Kansas Territorial Governor James W Denver. The town was promoted by a real estate salesman from Kansas named William H Larimer Jr. The store was created to serve miners, who were working the placer gold deposits 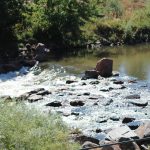 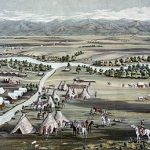 that had been discovered a year before at the confluence of Cheery Creek and the South Platte River. By 1859, tens of thousands of gold seekers had flooded into the area, but by then the placer deposits were already playing out and most miners quickly departed for home or headed west into the mountains in search of richer deposits.

The area where the gold had been found is called Confluence Park, and it is one of our favorite places in Denver, because of the beautiful trail that leads to it. Strangely, in all the years that Bob and I have been going to Denver, and all the years that we have been walking that trail, and enjoying that park, we never knew of the history that happened there. I suppose we might have if we lived in Denver, or even in Colorado, but since we don’t, it was simply a nice walking trail with a nice park, in a city we enjoy going for a visit, and it always will be that, but it is also a piece of history, and now I know that.

In 1860, the frontier town of Denver almost failed before it got started, because even though it was centrally 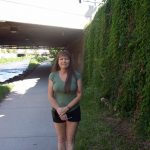 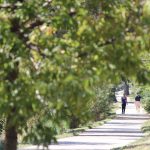 located for servicing the mining camps, it didn’t have rail or water transportation to make bringing in the needed goods to the store easier, or even feasible. Even when the transcontinental Union Pacific Railroad was built, it didn’t initially stop at Denver, so the little town struggled, but by 1870, Denver finally began to overcome it’s geographical isolation, when the Kansas Pacific Railroad arrived from the east, and the 105 mile Denver Pacific Railway that joined Denver to the Union Pacific line at Cheyenne. More connections would come later on, making Denver the city it is today.

Our Trip To Denver 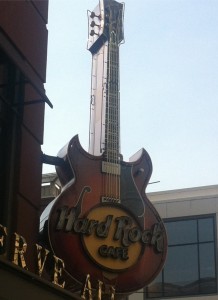 Recently, our office won a trip to Denver to attend a Rockies Game. The trip was mostly paid for by Safeco Insurance. It was a contest, and our office won be selling almost double what second place sold. The trip was much needed by all of us, as our office and our lives have been very busy lately. Amy’s husband Travis was not able to join us, so my grandson, Caalab came along. Amy and Caalab had never been to a professional baseball game, so for them this would be a special treat. Bob and I go to a Rockies game every year, and it never gets old.

Bob and I came down a day early, and Amy and Caalab came down with Jim and Julie, my boss and his wife. When they arrived, we wanted to take them to do some fun things. Our first stop was the Cherry Creek Mall, where both Amy and Caalab got 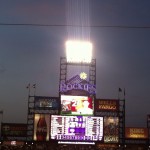 their very first Cinnabon cinnamon roll. Amy doesn’t like sweets most of the time, but this…well, this was different. She and Caalab both loved them, but then I knew they would. Our next stop was to the Hard Rock Cafe, which is another place Caalab had not been before. Caalab loves the guitar, so this was a place that would hold a special interest for Caalab. We walked around and looked at all the memorabilia and of course, Caalab bought some guitar picks. Then we headed for the room to get ready for the main event…the Rockies game. 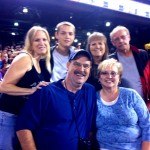 We has a great time at the game, with seats near the dugout. Several foul balls headed our way, but unfortunately…or maybe fortunately…none of them came to our seats, because, while Caalab, or even Bob or Jim, might have tried to get it, I’m quite sure the rest of us would have ducked, screaming, because as far as we were concerned, that is a missile coming at us, and I, for one don’t want to break a nail. Not that I’m a wimp or anything, but I’m not crazy either. Unfortunately, the Rockies lost, but they played a great game, and we had a wonderful time. Thanks to Safeco, and Jim and Julie.