righteous among the nations

Throwing Visas From The Train 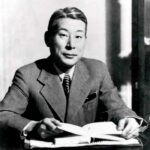 When we thing of people who were heroes for the Jewish people during World War II, we seldom think of true enemies of the Allied Nations. Still, there are people in all nations, no matter how evil the nation, who are good. One such man was Chiune Sugihara, a Japanese diplomat who served as vice-consul for the Japanese Empire in Kaunas, Lithuania. Sugihara was born on January 1, 1900 in Mino, Gifu prefecture, to a middle-class father, Yoshimi Sugihara and an upper-middle class mother, Yatsu Sugihara.

Sugihara became the vice-consul in 1939. His duties included reporting on Soviet and German troop movements, and to find out if Germany planned an attack on the Soviets and, if so, to report the details of this attack to his superiors in Berlin and Tokyo. As vice-consul, I’m sure he never expected to go against the orders of his superiors. I’m sure that he thought, as most of us do, that our country is the best one, and that our government is honorable and basically good…until we don’t. During the second world war, Sugihara made the decision…against orders from superiors…to help 6,000 Jews escape Europe by issuing transit visas to them, so that they could travel through Japanese territory. By doing this, he was risking his job and the lives of his family, but he knew that the things that were happening to the Jews were wrong, and he could not stand by and be a party to their deaths. The Jews that Sugihara helped were refugees from German-occupied Western Poland and Soviet-occupied Eastern Poland, as well as residents of Lithuania. I’m sure that Sugihara’s superiors didn’t want to anger their ally, Adolf Hitler, so they had told Sugihara to turn a blind eye to the fate of the Jewish people, and let the Nazis do what they wanted to do to them. But, Sugihara had a conscience, and he could not allow he Jews to be murdered in such a horrific fashion. He had to help as many as he could.

From July 18 to August 28, 1940, Sugihara being aware that Jewish visa applicants were in danger if they 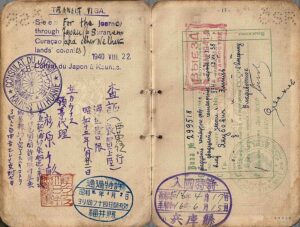 stayed behind, Sugihara decided to ignore his orders and issued ten-day visas to Jews for transit through Japan. Given his inferior post and the culture of the Japanese Foreign Service bureaucracy, this was an unusual act of disobedience. Sugihara spoke to Soviet officials who agreed to let the Jews travel through the country via the Trans-Siberian Railway…at five times the standard ticket price, of course. I guess there is no price too high…seriously. Sugihara continued to spend 18 to 20 hours a day writing hand-write visas, reportedly producing a normal month’s worth of visas each day, until September 4th, when he had to leave his post before the consulate was closed. While his time was cut short at that consulate, he had granted thousands of visas to Jews, many of whom were heads of households, thus permitting them to take their families with them. It is said that before he left, he handed the official consulate stamp to a refugee so that more visas could be forged, but his son, Nobuki Sugihara, insists that his father never gave the stamp to anyone. According to witnesses, he was still writing visas while in transit from his hotel and after boarding the train at the Kaunas Railway Station, throwing visas into the crowd of desperate refugees out of the train’s window even as the train pulled out. It was an insanely brave act, and it did not go unnoticed.

In 1985, the State of Israel honored Sugihara as one of the Righteous Among the Nations for his actions…the highest honor given to non-Jews.. He is the only Japanese national ever to receive it. The year 2020 was “The Year of Chiune Sugihara” in Lithuania. It has been estimated as many as 100,000 people alive today are the descendants of the recipients of Sugihara visas. When asked by Moshe Zupnik why he risked his career to save other people, he said simply, “I do it just because I have pity on the people. They want to get out so I let them

Chiune Sugihara died at a hospital in Kamakura, on July 31, 1986. Despite the publicity given him in Israel and other nations, Sugihara remained virtually unknown in his home country. I’m sure they didn’t consider him anything more than a criminal. Only when a large Jewish delegation from around the world, including the Israeli ambassador to Japan, attended his funeral, did his neighbors find out what he had done. His subsequent considerable posthumous acclaim contrasts with the obscurity in which he lived following the loss of his diplomatic career.