Crazy Horse has a serious score to settle with The White Man. The government wasn’t suppose to let the settlers into the Dakotas. Then explorers went in anyway, and found gold. Of course, the government reneged on the deal, and The White Man came flooding into the Dakotas. In reality, it was going to be inevitable. A some point, the United States and her people were going to grow to a place whereby they would need more room. Eventually someone was bound to find the Dakotas, and especially one of my favorite places, The Black Hills. This was the area of the United States where the Lakota Sioux and Crazy Horse lived. 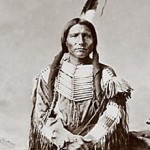 Tail became jealous of the attention the Army gave to Crazy Horse. They had adopted many of the White Man’s ways, and when they heard a rumor that Crazy Horse was planning to slip away, and go back to their old ways. Crazy Horse had actually agreed to fight on the side of the White Man, but his words were misinterpreted, and on the morning of September 4, 1877, just four months after his surrender, the Army attacked Crazy Horse’s village. Crazy Horse agreed to accompany Lieutenant Jesse Lee back to Fort Robinson, there Lieutenant Lee was told to turn him over to the Officer of the Day. He didn’t want to, but he did. As he was taken into custody, Crazy Horse struggles and was stabbed with a bayonet by one of the members of the guard. He died later that night. It was a sad case of misunderstanding, and it cost him his life.