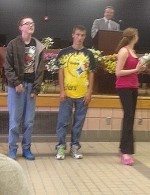 Yesterday, was the awards ceremony at Josh, my grandson’s school. My daughter and her husband attended, because they were told that Josh would be receiving an award. Little did they know what the day would hold for them. The point in the program for Josh’s award came. Four students were called forward, but no award was announced. When the four students were assembled on stage, the award was finally announced. My daughter, Corrie and my son-in-law, Kevin were stunned. The award was the Presidential Education Award for Outstanding Achievement!!

Now, Corrie and Kevin knew what this award was, but I did not. This award is BIG!! Here is what I have learned about this award. While there is no limit to how many students can receive the Presidential Education Award for Outstanding Achievement, their are specific requirements that must be met in order to receive the award. The purpose of this award is to recognize students that show outstanding educational growth, improvement, commitment to or intellectual development in their academic subjects. This award is given at the principal’s discretion based on the criteria developed at the school. The criteria should reflect the purpose of the award and must be applied fairly to all students. These are examples of the criteria for which the

School has not always been easy for Josh. He was born 5 weeks prematurely, and learning disabilities are common in premature babies. While Josh’s struggles could have been more severe, they nevertheless made hard work a requirement to achieve his high marks. We could not be more proud of his hard work and his achievements!! Included in his award 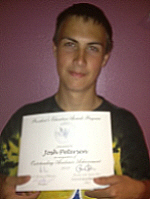 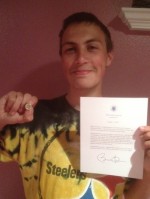 were the Presidential Education Award pin, the Certificate of the Award, and a Congratulatory Letter from the President.

This award came as such a surprise to all of us, even though we all knew that Josh had worked very hard to excel in school. We simply couldn’t be more proud than we are at this moment. Congratulations Josh!! You are growing up so fast, and proving your abilities in so many areas of life. We love you very much, and we are so very proud of all that you have accomplished!!