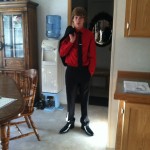 My nephew Riley Birky is growing up so fast, in fact, I can’t believe how tall and adult like he is getting. Riley is a Freshman this year, and that has given him a chance to learn public speaking. Public speaking, to me is a subject that should only be taken by those who truly want to become public speakers. I am definitely not one of those people. I’m far to shy for it, and from what I hear, Riley and I have that in common. I hope for Riley’s sake that he can overcome that shyness, because it is hard to live with.

Public speaking is quite possibly the only thing that Riley is shy about. He has be practicing Tae Kwon Do for two and a half years now. He loves the challenge of fighting, so the next logical step was for him to start boxing. He is pretty excited about learning to box. While Tae Kwon Do, Judo, boxing, or any other form of fighting is not my cup of tea, I have to say that they are very interesting to watch. It takes a great degree of skill to learn these arts, and a lot of dedication and discipline. I think Riley has those traits, and that they will take him far.

Riley loves music, especially Rap music. Personally, I could never see the draw that Rap music has, but then I am not a teenager. It seems to me that every generation has a new type of music. I know my own parents absolutely hated the Rock music my sisters and I listened too, and now that I’m a grandmother, I personally go for Country music, so now I can agree with my parents’ thoughts on Rock, or any of the other music of today’s generation…sorry Riley. 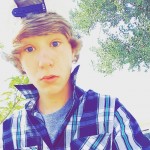 Riley may be growing up fast and spreading his wings in many ways, but one thing has never changed. Riley loves his mom and his little brother, Tucker. He may not always see eye to eye with them, but he loves them nevertheless. Riley is also loves his dad, sister and family, and gets along well with his stepdad, my brother-in-law, Ron. The teen years are tough, no matter who you are. Lots of changes are going on within you, and you are trying decide who and what you are going to be. Riley still has time to make the choices about his future that are his alone to make, and I’m sure that he will be a success in whatever career choice he makes. He is a kind and loving young man, and that will carry him a long way…no matter what he decides to do with his life. Today is Riley’s birthday. Happy birthday Riley!! Have a great day!! We love you!!