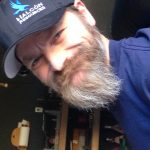 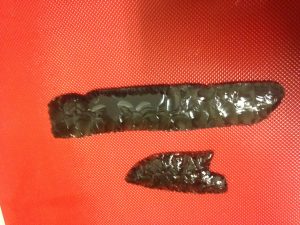 When you think of Indian arrowheads, you usually think of the Old West or the cowboys and Indians. You think of the battles the Indians had over broken treaties and the influx of settlers into the west. That’s what you think of, but that isn’t what my nephew, Steve Moore thinks of…at least that’s not the only thing he thinks about. For Steve, thoughts of arrowheads bring thoughts of obsidian.

You might think that is strange, but Steve has learned the ancient art of flintknap. It all started with his love of wall climbing. He learned to make the hand and foot holds for wall climbing. Then, he started thinking about flintknap. Flintknap is the art of making arrowheads and other weapons from rocks, like obsidian. Steve started

with pieces of broken glass, and later graduated to rocks, and even bone. He and a friend named Scott, made a trip to Oregon and brought back a truck load of obsidian, and Steve taught Scott and another friend, Jay how to flintknap. Steve, made some amazing tools to knap with.

Through the years, Steve got out of the flintknapping hobby for a time…twelve years or so, but has recently picked it up again. Flintknapping is a great hobby to engage in while sitting around the campfire or the fireplace in the evenings. Steve made two arrowheads each weekend these past two weekends. His wife, my niece, Machelle told me that when you are flintknapping, you have to learn how not to bleed. If Steve gets that talent accomplished, I know several people who would like to know the trick to it.

Steve likes obsidian the best, because it creates beautiful shine and color to the arrowheads and other weapons. The rainbow obsidian is one of Steve and Machelle’s favorites because of the beautiful colors it contains. The orange of the pumpkin obsidian is also stunning. When I looked at the pictures that Machelle sent me of Steve’s work, it felt like I was looking at jewels. The arrowheads sparkle and shine, almost like 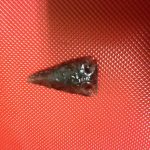 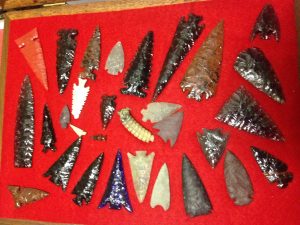 diamonds. I was stunned to find that Steve had such a talent, but then it’s pretty typical of Steve not to blow his own horn. That just isn’t his style, so I guess I’ll just do it for him, because as far as I’m concerned, Steve has an amazing talent. These arrowheads and weapons, while functional if they ever needed ammunition, are so much more than that. They are absolutely beautiful. Today is Steve’s birthday. Happy birthday Steve!! Have a great day!! We love you!!