The Indian motorcycle came into being in 1901, and is noted as the first motorcycle in the United States. My grandfather, Allen Luther Spencer owned one, which he dubbed That Old Indian Motorcycle in the very early 1900’s. He decided to ride the motorcycle from Ladysmith, Wisconsin to Rushville, Nebraska to meet and visit his Aunt Tessie Spencer Davis. Because gas stations were few and far between, he would have to carry gas with him. Even then, there were times he ended up pushing the motorcycle to the next gas station, such as the point in South Dakota where he pushed it for quite a few miles after running it out of gas.

My Uncle Bill tells of a point in Nebraska, where his dad ran into a bunch of Indians, who invited him to supper. He wasn’t sure how the Indians felt about the white man at that point, so wanting to make sure he didn’t offend them, he accepted their offer. There were about a dozen Indians, with several horses and a bunch of dogs there. Indians had always had a bunch of dogs around, because they are a kind of self storing, self perpetuating food supply. The Indians picked out a rather plump dog, killed it and made a stew.

Now, I don’t know about you, but my mother always told me that when you are invited for a meal, you eat what is put in front of you. I know that 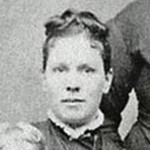 a lot of people have eaten things like snake or rabbit, and been told that it tasted just like chicken. I’ve eaten rabbit, and I do not agree. There is no similarity as far as I’m concerned. I have never eaten horse or dog meat, and I think I would have to be just about starving to death before I would consent to eat it…sorry Mom. Nevertheless, my grandfather had no desire to offend those Indians, so he ate the bowl of stew offered. After that, they offered him a second, third, and finally a fourth bowl. He pretended the stew was very good, while secretly praying they would not offer a fifth bowl. He really didn’t want to offend the men who far outnumbered him, and there was nowhere he could turn for help. Finally, they could tell that he was either very full, or maybe even a little green around the gills, so they decided that supper was over and after talking a while, they set up some tents and settled in for the night. Grandpa moved his motorcycle a little way away from their camp, and tried not to fall asleep, wanting to keep his scalp, and not knowing if they still scalped people or not. He finally fell asleep, in spite of his efforts not to, and in the morning the Indians were gone.

The rest of the trip was completed without further incident, and he made it to Aunt Tessie’s house, scaring her and her 7 year old daughter Ruth, when he came down the road as boldly 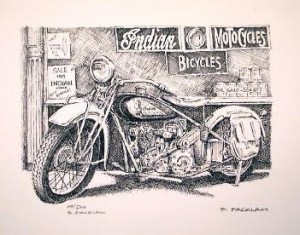 as you please. They were the only ones home, and they lived many miles from the nearest neighbor. After dismounting the motorcycle, he walked up to her front door, and when she answered, he said, “Aunt Tessie, I’m your nephew, Allen Spencer, from Wisconsin.” It was an unusual way to meet her nephew, and it might have helped if he had sent her a letter telling her he was coming, but they quickly got to know each other, and he spent several months with the family before heading back to Wisconsin. I would imagine it was a visit that Aunt Tessie never forgot.