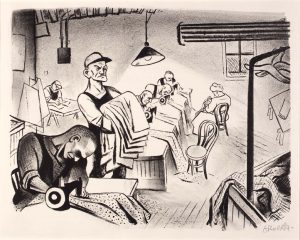 In a day and age when we see protests so often that we often pay very little attention, it’s easy to think that the protestors are just being ridiculous, and sometimes they are. That makes it easy to overlook the situations that really should be protested, or at least greeted with outrage. I suppose that every issue that is protested has its outrage, and sometimes the only way to get the attention an issue needs is to walk out and protest. Sometimes protests are simply the last resort.

On this day, September 4, 1894, 12,000 tailors embarked on a strike to fight against the “sweatshop” system that exploited their labor. The tailors demanded that they be given a 10 hour work day, with an hour off for lunch. They wanted a weekly minimum wage and a weekly pay day. The “Protective Association” of cloakmaker manufacturers as well as important clothing dealers, “declared that they considered the demands of the men right, that no business which could not pay the workers the minimum wages asked ought to exist,” while “the 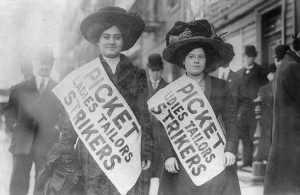 press and the public have also heartily sustained these demands, so that there can be no doubt that the public will pay, if necessary, the increased prices for the clothing rendered necessary.” While all that sounded good, the strike would continue through much of the fall. The striking workers said that the had to live half a year on what they could save out of the meager $4 per week they earned during the other half of the year. The year 1894 was a year of economic depression and widespread labor unrest. The strikes included the Pullman Strike, which paralyzed the railroads, and made Eugene Victor Debs America’s most important labor leader.

Labor conditions were atrocious in many cases, and the laborers often had little recourse. The big business owners had the control, and the laborers were at their mercy. If they wanted a job, they were to “shut up and do their job” or they wouldn’t have one. Many times these laborers had limited education, and so few options. 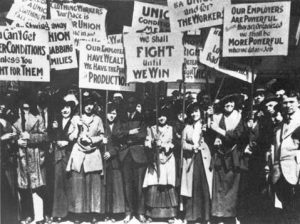 They also had families to support. Their wages were their lifeline, so they worked and worked, hoping that somehow they might create a better life for themselves and their families. These people were willing to work. All they asked for was a fair shake. Finally, they got to a point where they knew that they weren’t going to get that fair shake and they were left with no other options but to strike. It’s sad that it had to come to that point, but sometimes the strike and protest is all you have. There were other protests within the tailor industry, and many other industries too. Each one probably improved a few things, and eventually conditions got better. Of course, there will always be things to protest and people who will do so.