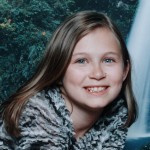 When my sister, Cheryl suggested that my little granddaughter, Shai, who was only ten years old, spend the last month of her summer vacation taking care of our parents, while Dad was recovering from a very serious set of circumstances beginning with Pancreatitis, and Mom was beginning treatment for a Large Diffuse B-Cell Lymphoma of the brain, I was sceptical, but Cheryl argued that Shai was a mature ten year old, and she could do it. I worked nearby, and could easily get to my parents house in a matter of minutes, and so it was settled. Shai made me so proud. She was like a professional nurse. I checked in with her, and she called me sometimes, but I never had to go over and rescue her. I went at lunch to help out, but my girl…well, she could handle it, and there was no doubt about it. Shai saved us that August. By the time school started again, Mom was enough better to help out with Dad, and handle most things that came up.

There are girls…and boys too, who just have that capability. They understand the things that need to be done, and they aren’t afraid to step up and do what is needed. They don’t look at the enormity of the situation, failure never enters their mind, they don’t seem to know the word can’t…they just do. I don’t say that my girl was the only girl like that, but I couldn’t have been more proud of how she handled that situation.

I was looking through some information in my Uncle Bill’s family history books, and I came across something that I didn’t know about before, but found very interesting. When my Uncle Bill was just a baby, my grandparents owned a hotel in Tomahawk, Wisconsin. The family lived in the hotel, and grandma ran it, while my grandfather was working at the papermill. It’s pretty hard to run a hotel, which most likely included cooking meals to sell to the guests, and still take care of a baby and a ten year old girl. But, my Aunt Laura was 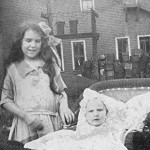