On June 25, 1950, when North Korea invaded South Korea, my uncle, Larry Byer found himself in the middle of what would become some of the hardest years of his life. Uncle Larry was an Army private during the Korean War. Korea was originally under the rule of the Japanese empire, but when it collapsed after World War II, the country was divided. The United Nations, using the United States as its main force, came to aid of South Korea. China, along with assistance from Soviet Union, came to aid of North Korea. North Korea was unhappy with the division of the country that took place after World War II. The global tensions of the Cold War that developed immediately afterwards didn’t help the situation either. Then the North Korean government decided 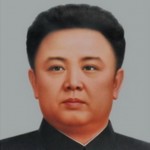 to get back the area they believed was actually theirs. In reality, Korea isn’t the only country ever to be divided, so had they simply accepted it, the problem might have been resolved right away, but they simply wouldn’t.

I understand why something had to be done with the country of Korea, because they had no government, but it doesn’t seem right to me to divide the country. Nevertheless, it was done that way, and in reality, that area has been volatile since that day. North Korea has tried to take over South Korea. They have also made many threats to the rest of the world. Their leader, Kim Jong-il, and now his son, Kim Jong-un, have both proven to be ruthless, and about half crazy. The rest of the world is

constantly trying to decide if we need to go in an blow them up, or try not to make them too angry. Time will tell, and it depends on Kim Jong-un.

This was the world my Uncle Larry found himself in while he was a private in the Army. The North Koreans fought their battles in any underhanded way they could come up with. Their only goal was to win the war. They didn’t of course, and soon, my Uncle Larry came back home. I’m sure he was very happy to be back home. Spending any time in a crazy war like the Korean war would never be ideal in any way. I am just thankful that he made it home. Today is Uncle Larry’s birthday. He would have been 82 years old. Happy birthday in Heaven Uncle Larry. We love and miss you very much.