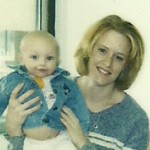 My grandson, Caalab, has always had a thing for the older woman. Practically from the time he was born, he had made up his mind that he was going to marry his mom’s best friend, Carina. We all figured that it would be a passing phase, since many little boys love older girls, and for a variety of reasons, not the least of which is that they “oooo and awww” around the lucky kid and do all the things they do to make them smile and laugh, thereby letting the little boy know that they are just the coolest thing ever. And maybe those girls are right about that, but then again, maybe I’m biased. I do think I have the coolest, handsomest grandsons ever, and the coolest and prettiest granddaugter ever. 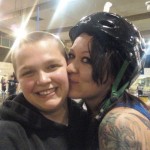 As he got older, it became obvious that Caalab wasn’t really changing his mind about Carina. He was pretty gone on her, and in fact, when she was about to get married, we had to let Andy, her fiance know in no uncertain terms that he would not only have to get Caalab’s ok, but when the time came for Caalab to marry Carina, Andy would have to step aside…and just be a man about it too. As they years have gone by, Caalab had determined that it wouldn’t really be fair to Andy, to ask him to step aside, especially now that Carina and Andy have a son, and a boy really needs to have both mom and dad around if possible, so he has turned his focus on other older women. 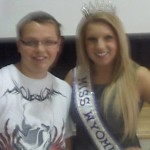 Caalab’s dad, Travis, is the announcer for the local Roller Derby Girls, so Caalab gets to go to the derbies quite often, and I don’t know if it is just because he is so cute, or what, but here he is again, cozying up to the older woman…and receiving a kiss for his efforts and cuteness. But, as he has gotten older himself, he is still keeping his options open. He isn’t just limiting himself to one older woman. He likes them all. From his mom’s friends, to roller derby girls, to beauty queens. If he can cozy up to a pretty girl, he will do it. And I suppose one can’t really blame him for noticing a pretty girl. And the good news is that as he gets older, the older woman seems to get younger.